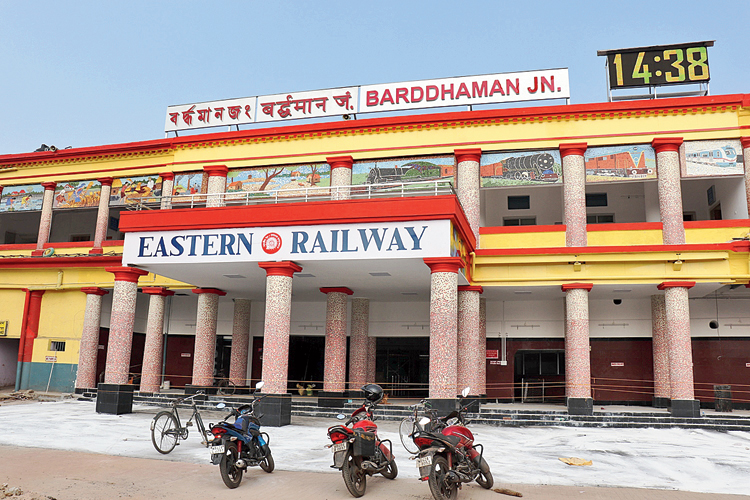 The railways have restored a portion of the 166-year-old main building of the Burdwan railway station less than two months after its collapse.

The formerly concrete constructions — which were undergoing extensive renovation when the cave-in occurred on January 4 night — have been replaced with a load-bearing structure made of iron.

On Sunday morning, the main entrance to the station — which had been closed since the mishap — was reopened after a final inspection by a group of railway officials.

“First of all, we have tried to retain the original look of the Burdwan station so that people can feel it is the same old building. We have done the work in record time and it is a first,” said Ishaq Khan, divisional railway manager of the Eastern Railway’s Howrah sector.

Railway officials also said the new iron structure would bear its own load and would not be an additional weight on the pre-existing concrete in the old structure.

They said Jadavpur University academics and officials had assisted them during the repair of the heritage station.

“The new support structure is made of iron and the lawn (passageway) on the first floor has been built with steel,” said Khan.

On the night of January 4, a portion of the Burdwan railway station — a 166-year-old structure — collapsed during renovation and repairs, killing one person and injuring another. The collapse occurred late in the day in an area that is otherwise teeming with pedestrian traffic.

Following the collapse, questions were raised as to why no proper health audit of the building had been done before commencing the repairs on a heritage building. Later, railway authorities formed a three-member committee to probe the matter. In their report, the committee fixed responsibility for the accident on the agency engaged in the repairs.

Nirod Baron Sarkar, a local historian who owns a collection of photographs related to old railway stations in Burdwan, however, insisted this week that the memory of January’s accident would be written into the history of the station.

“It is good that the railways have tried to retain the old look of the station building. But it is a bad memory for us that the original building could not be saved,” said 83-year-old Sarkar, who lives in Burdwan town and has penned several books on the history of Burdwan.