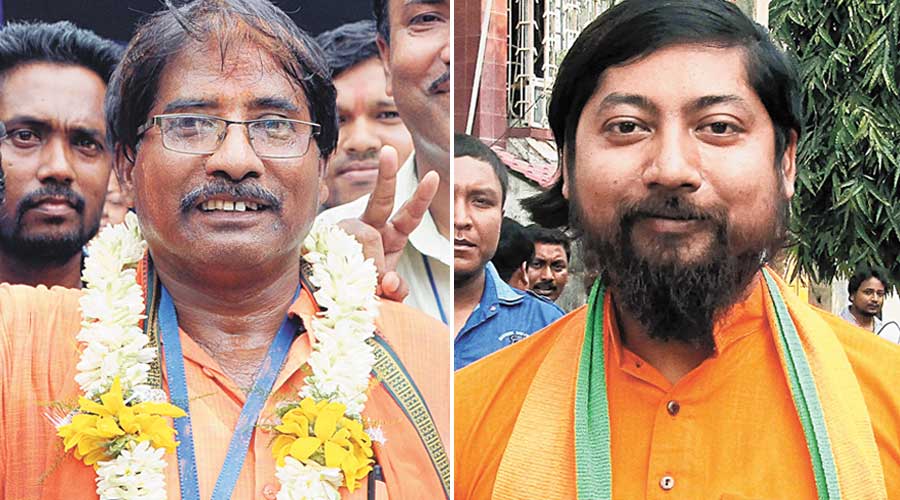 The beleaguered Bengal BJP is struggling to put up a united front ahead of the October 30 by-elections with the apparent reluctance of party MPs — Jagannath Sarkar and Nisith Pramanik — to campaign hard for Santipur and Dinhata, the two seats the party hopes to win, making things difficult on the ground.

Bypolls for Gosaba, Khardah, Santipur and Dinhata will be held on October 30 and the BJP has been banking heavily on Sarkar and Pramanik to retain two of the four Assembly seats that the party had won in the summer elections.

The bypoll for Santipur was necessitated after Sarkar opted to vacate the Assembly seat and retain his place in Parliament. Similarly, Pramanik vacated the Dinhata seat to stay on as MP and went on to be appointed as the junior minister for home in the Narendra Modi government.

With an eye to win the Santipur bypoll, BJP appointed Sarkar as the observer for the Assembly segment. However, he refused to take the responsibility and informed the state BJP unit about his inability to dedicate much time for the polls due to preoccupations elsewhere.

“Even before Durga Puja, Jagannathda had clearly told our leaders that he wouldn’t be able to work as the Santipur observer. He had said he would be busy with pujas and in his role as a member of parliamentary standing committees,” a state BJP leader said.

The real reason, however, is Sarkar not being on good terms with BJP’s Santipur candidate Niranjan Biswas, the leader added.

Sarkar had hoped the party would field someone of his choice for the Santipur bypoll but when that did not happen, he made his discontent clear.

“To ensure that none raise their fingers at him, Jagannathda is taking part in the campaign but not in the way the party expects him to do,” a BJP leader in Santipur said.

Refuting allegations of factionalism, Sarkar said: “We are a united team and the BJP candidate will win by a huge margin.”

On the other hand, Pramanik is seen campaigning less for the party’s Dinhata candidate Ashok Mondal and busy with ministerial work in Delhi.

“We understand that Nisithda is a minister. Yet this constituency is also a part of his responsibilities. More so when there have been defections to the Trinamul only because the leaders were unhappy with Nisithda,” a leader in BJP’s Cooch Behar unit said.

The leader said Pramanik had joined the campaign in the last one or two days.

“Mihir Goswami also joined our party from Trinamul. Yet he has been campaigning hard in Dinhata. Goswami and Mondal were attacked by Trinamul goons but Nisithda was nowhere to be seen. As a minister he should have been leading the campaign from day one,” the leader said.

According to a state BJP functionary, the party hopes to win Santipur and Dinhata. The chances, however, have been affected because of Sarkar and Pramanik’s near absence during campaigning which in turn has brought down the morale of party workers, a senior state committee leader said.