Sixty-five parakeets and three hill mynas were seized from an autorickshaw on its way to Galiff Street, where the birds would have been sold, on Sunday. 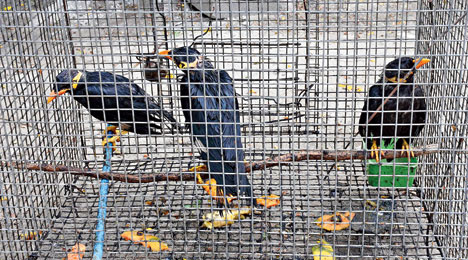 Galiff Street: Sixty-five parakeets and three hill mynas were seized from an autorickshaw on its way to Galiff Street, where the birds would have been sold, on Sunday.

Trading in indigenous birds is prohibited and both the species that were seized are protected under the wildlife protection act, forest department sources said.

The driver of the autorickshaw in which the birds were being ferried was arrested. Mohammad Subrati, in his mid-30s, was produced in Bankshal court on Sunday and remanded in judicial custody for a day.

The forest department had received a tip-off about the birds being taken to the Galiff Street market.

"As soon as the autorickshaw entered Galiff Street with the birds, we stopped it and seized the birds. The driver was detained and later arrested," a forest department official said.

The website of the International Union for the Conservation of Nature (IUCN) mentioned that the Common Hill Myna "occurs in moist or semi-evergreen forest in lowlands, hills and mountains. It is known for its ability to mimic sounds, including human speech".

"The population is suspected to be in decline owing to trade and to widespread forest destruction, although rates of decline are unlikely to be higher than moderate, as this species is tolerant of secondary and degraded habitats," the website adds.

A conservationist working for an NGO said that birds are sold on Galiff Street every Sunday. The trading begins around 5.30am. "Despite forest department raids, birds protected under the wildlife act are still sold there," he said.