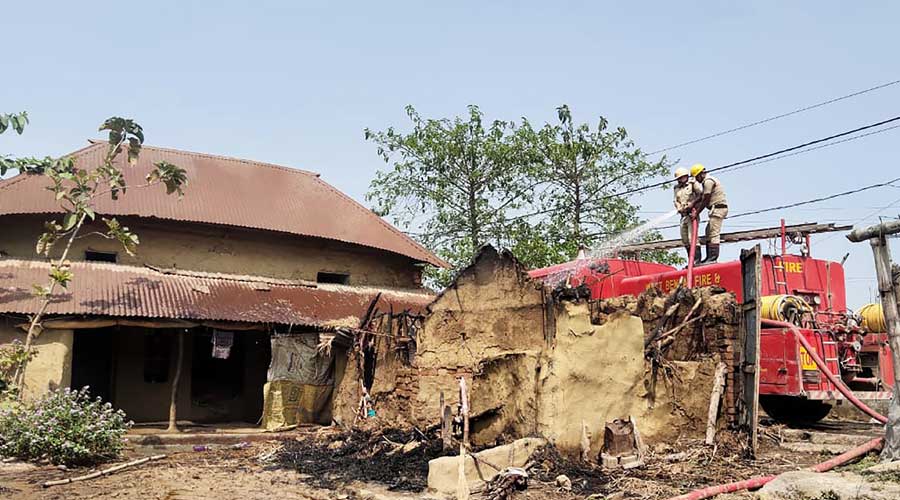 At least 20 people have been arrested so far in connection with the incident, suspected to have been triggered by the killing of a local TMC leader on Monday evening
File picture
Our Bureau, PTI   |   Calcutta, Rampurhat   |   Published 24.03.22, 12:13 PM

The eight people, including three women and two children, who were burnt alive in Bogtui village in West Bengal's Birbhum district were badly beaten up before the carnage, their post-mortem examination has revealed.

As per preliminary findings of the forensic experts, who conducted the tests on the charred bodies found inside the houses that were allegedly set on fire by unidentified people early on Tuesday, the victims were first badly beaten up and then burnt alive, an official told PTI from Rampurhat hospital.

At least 20 people have been arrested so far in connection with the incident, suspected to have been triggered by the killing of a local TMC leader on Monday evening, and several police personnel and civic volunteers removed on grounds of negligence.

She took a helicopter from Dumurjola Stadium in Howrah and landed on a helipad near the village amid tight security.

She went to Bogtui village and spoke with the family members of those killed.

The chief minister also separately spoke with the family members of slain local TMC leader Bhadu Sheikh. One of his family members fell ill while describing their ordeal to Banerjee.

CCTVs have been set up around the helipad where the chief minister's helicopter will land, a senior police officer said.

Banerjee is scheduled to hold meetings with senior police officers including Director General of Police Manoj Malaviya before visiting Bogtui. Later, she may also visit Rampurhat hospital to meet the injured people, another official said.

State Congress chief Adhir Ranjan Chowdhury and a five-member central team of the BJP are also scheduled to visit Bogtui.

Banerjee has vowed that strict action will be taken against the perpetrators irrespective of the party affiliation even as Prime Minister Narendra Modi described the killings as "heinous" and said that the culprits should not be forgiven.