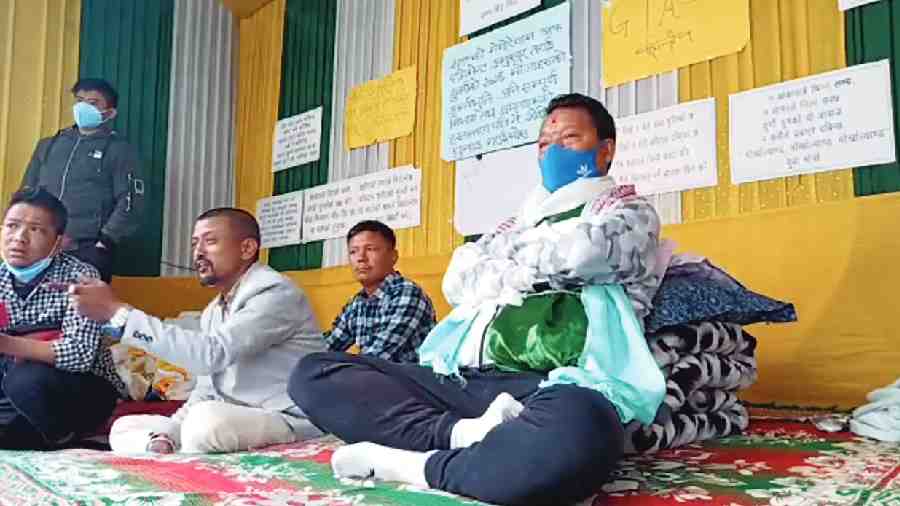 GJM supremo Bimal Gurung has officially ended his 100-hour hunger strike after he has been hospitalised following a deterioration of his health while his party has decided not to contest the upcoming GTA elections.

Gurung, who was staging an indefinite hunger strike at his party's Singamari office in Darjeeling town since May 25 demanding the deferment of the June 26 Gorkhaland Territorial Administration (GTA) polls and expansion of the semi-autonomous council's jurisdiction, fell ill on Sunday and was admitted to a hospital in the hill town in West Bengal.

He was shifted to Sir Thutob Namgyal Memorial (STNM) Hospital in the neighbouring Himalayan state during the day.

Doctors attending Gurung said he has a high blood sugar level, which was fluctuating, and he was passing blood through his urine, which is why he was shifted to STNM Hospital.

"Bimal ji has been admitted to a hospital, and on doctor's instruction, he has withdrawn his indefinite fast. We hope he gets well soon. We have decided after a meeting of party leaders that we will not participate in the GTA polls," Gorkha Janmukti Morcha (GJM) general secretary Roshan Giri said.

Gurung had urged West Bengal Chief Minister Mamata Banerjee to defer the GTA polls until the Memorandum of Proposal (MoP) submitted by the GJM was implemented in the hills.

According to GJM sources, the MoP, among other suggestions, calls for honouring in letter and spirit the Memorandum of Agreement that was signed in 2011.

The MoP also mentions the demand for the transfer of several departments to the GTA, besides the inclusion of 396 Gorkha-inhabited mouzas as per the procedure laid down in the agreement.

The elections to the GTA, a semi-autonomous body to administer Darjeeling hills formed in 2011, were last held in 2012. The GJM had swept the polls, winning all 45 seats.

Darjeeling, often referred to as the 'Queen of the Hills', has witnessed several political parties over the years promising a separate Gorkhaland state and implementation of the Sixth Schedule, which grants autonomy to a tribal-inhabited region.

Although the demand for separation of the region from West Bengal is over a century old, the Gorkhaland statehood movement was ignited by GNLF leader Subhash Ghisingh in 1986.

The violent stir claimed hundreds of lives and culminated in 1988 with the signing of the Darjeeling Gorkha Hill Council, which governed the region with a certain degree of autonomy till 2011, following which GTA took over in 2012 after the fresh stir by Gurung. More violent bouts were witnessed, including the 104-day long strike in the Darjeeling hills in 2017.