Phuentsholing, which sits on the other side of Jaigaon that is in Alipurduar district, is the principal entry point for foreign nationals as well as Bhutanese who enter the country via land 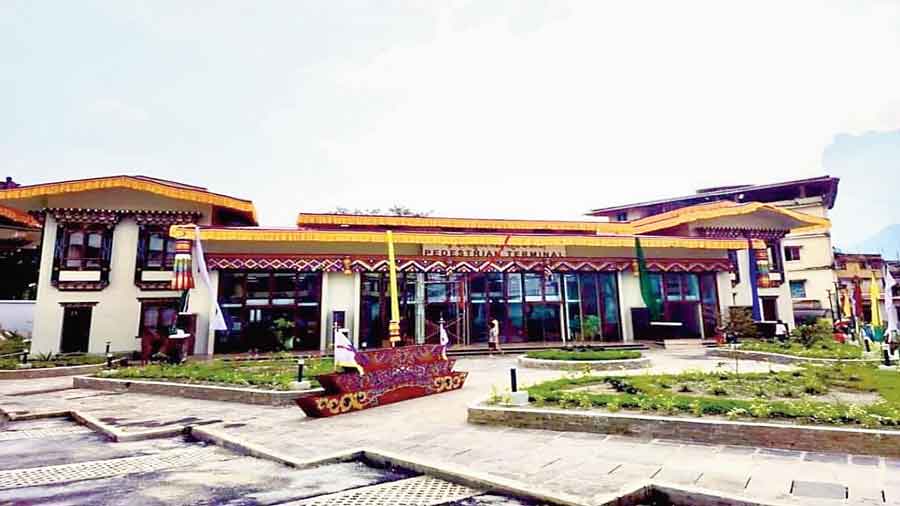 The pedestrian terminal inaugurated by Bhutan Prime Minister Lotay Tshering at Phuentsholing on Monday.
Our Bureau   |   Siliguri   |   Published 20.09.22, 01:28 AM

Lotay Tshering, the Prime Minister of Bhutan, visited Phuentsholing, the commercial capital of the Himalayan kingdom, on Monday to oversee arrangements ahead of September 23 when the country would reopen land borders along India for passenger movement after a gap of almost two-and-a-half years.

Phuentsholing, which sits on the other side of Jaigaon that is in Alipurduar district, is the principal entry point for foreign nationals as well as Bhutanese who enter the country via land.

During his visit, Tshering also inaugurated a pedestrian terminal — the first-of-its kind infrastructure that was built in the country — at the border town. The facility will help in documentation and in regulating the entry and exit of Bhutanese and foreigners alike through Phuentsholing, he said. In the past few days, Tshering had been criss-crossing the country to run a check on the preparations on the land borders.

Along with Phuentsholing, three other gates, Gelephu and Samdrupjongkhar in Assam, and Samtse in Bengal, will also reopen on Friday.

“We will build similar terminals in the rest of the southern districts. We have travelled and studied the situation at all other border gates in the country. We are ready for the border gate reopening this week,” the Prime Minister was quoted to have said by the Bhutan Broadcasting Service Corporation Limited.In March 2020, Bhutan had halted cross-border movement of people following the outbreak of Covid-19.Tshering’s visit to Phuentsholing and other bordering areas, which are in southern parts of Bhutan, is significant, said senior members of the business and tourism fraternity of north Bengal.This is because there is an expectation that there will be an exhaustive movement of people through these land borders from September 23, they said.

“Before the Covid-19 pandemic, around 70 per cent of the foreign tourists who would visit Bhutan were Indians. As the country is opening its gates after almost 30 months and has brought in certain changes in rules and regulations for tourists, the Bhutan government wants to ensure that all necessary arrangements are in place,” said Samrat Sanyal, general secretary, Himalayan Hospitality & Tourism Development Network.

Members of the business community of Jaigaon — the town that is largely dependent on Bhutan — are eagerly waiting for Friday.

In the past two-hand-a-half years, the economy of Jaigaon had suffered a major setback as people from Bhutan couldn’t cross the gate to visit the town. Many traders have sold their properties and some have even left the town.“It is indeed a huge relief for us as the market of Jaigaon largely depends on Bhutan. We hope our local economy will start reviving once the movement of people resumes across the border,” said Ramashankar Gupta, the general secretary of the Jaigaon Merchants’ Association. Sources in Bhutan said according to the new rules, any Indian entering Phuentsholing does not need any permit but will have to carry his passport or EPIC. However, if he intends to move further to Thimphu and Paro, he will have to obtain the permit.

“Also, unlike Phuentsholing, through which any foreign national can enter, the other three entry points would be open only for Indians,” said a source. The Bhutan government has decided to conduct cultural programmes to welcome all those who will enter the country on September 23. “Such functions would be held at Paro airport and at all the four land borders,” the source added.