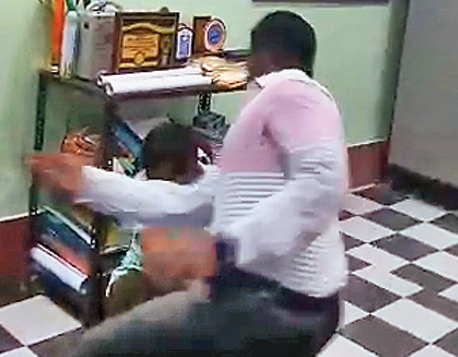 The Bengal government on Monday sent Alipurduar district magistrate Nikhil Nirmal on leave for 10 days after a purported video of him and his wife allegedly beating up a youth inside a police station went viral.

The government was yet to take any steps against Soumyajit Roy, the inspector-in-charge of Falakata police station and some other officers present in Roy’s chamber where Nirmal and his wife Nandini Krishnan allegedly beat up Binod Kumar Sarkar after accusing him of making lewd comments on social media about the DM’s wife.

The Telegraph cannot confirm the authenticity of the video. It was apparently recorded on Sunday morning.

“I had no idea Nandini Krishnan is the district magistrate’s wife. I was a member of a group on social media and I reacted to some of her comments. If I had done anything wrong, I could have faced legal consequences. But the DM and his wife beat me up in front of police officers,” Binod, in his early thirties, said while being led to a court on Monday.

Binod, a Falakata resident whose father is a farmer and who makes a living by giving tuitions, has been charged with “outraging a woman’s modesty” and under the Information Technology Act. “The court granted him bail,” said his lawyer Babul Saha.

The purported video shows Nirmal allegedly hitting Binod repeatedly, and Nandini slapping and kicking him. “I have sent a letter to the chief minister saying they (Nirmal and his wife) should be arrested,” said Siliguri CPM MLA and mayor Asok Bhattacharya.

“None of the cops tried to protect the youth. They should also he held responsible,” said BJP Alipurduar president Ganga Prasad Sharma.

On Monday, Binod’s parents went to the Falakata police station to file a complaint against the DM and his wife. “The officers said they were too occupied with a Trinamul rally. They have asked us to come on Tuesday,” Binod’s mother Kalpana said.

Nirmal was away from office on Monday and could not be contacted. Nor could Sunil Yadav, the district police chief.

Nabanna sources said Nirmal had been asked to go on leave for 10 days. “We can’t take steps on the basis of a clip. We will inquire once there is a formal complaint,” said a source.