The BJP has already termed the Trinamul candidate as an 'outsider' 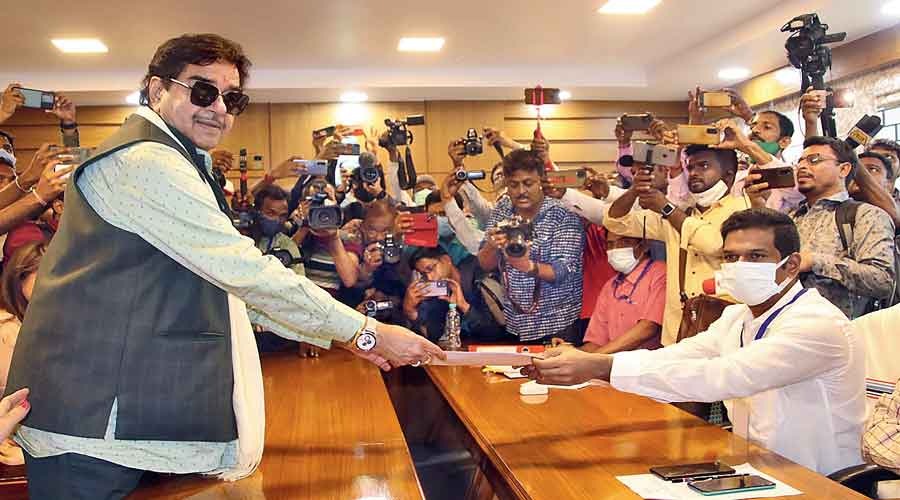 Shatrughan Sinha on Monday filed nominations as the Trinamul Congress candidate for the Asansol Lok Sabha bypoll after launching his campaign with a road show in a constituency that the BJP won in 2014 and 2019 by a sizable margin.

“We are happy to see that the people of Asansol have accepted our candidate wholeheartedly. There is no doubt that we will win this time from Asansol,” said Bidhan Upadhyay, Asansol mayor and Trinamul West Burdwan president.

Law minister Maloy Ghatak, Trinamul MP Kalyan Banerjee and all party MLAs in the district were present during the 4km road show.

Sinha, who originally hails from Patna, said his connection with Asansol was well established when he had come to the coal belt over three decades ago for the shooting of Kaala Patthar where Amitabh Bachchan was his co-star.

“I am not an outsider here. I have deep-rooted connections with Bengal and I can also speak Bengali well. I have come here to win over your hearts following a call from the Bengal tigress and your beloved Mamata Banerjee. I respect her,” Sinha said.

He arrived at the DM office around 11.30am but it took over two hours to complete the process of filing his nomination as there were some errors in his affidavit.

The BJP has already termed the Trinamul candidate as an “outsider” contesting from Asansol. While reacting to the “outsider” tag, Sinha said that if he was tagged “outsider”, what BJP leaders would say about Prime Minister Narendra Modi who won from Varanasi though he originally hailed from Gujarat.

“If the Prime Minister can contest from Kashi (Varanasi), what is the problem with me contesting from Asansol?” asked Sinha, who left the BJP after differences of opinion with Modi and the present BJP leadership.

The BJP candidate for Asansol, Agnimitra Paul, said the Uttar Pradesh chief minister had never labelled anyone coming from other states as “outsider”. But the Bengal chief minister always tagged the Prime Minister and other BJP national leaders as “outsiders”. “So, we want to know why they fielded an outsider for the Asansol seat.”

The BJP candidate, however, said she had grown up watching Sinha’s movies and she wished him good health.