Army rescues over 1,000 tourists in Sikkim stranded in snow

Owing to the snowfall, the government on Sunday stopped issuing permits for Tsomgo Lake and for any place beyond Yumthang 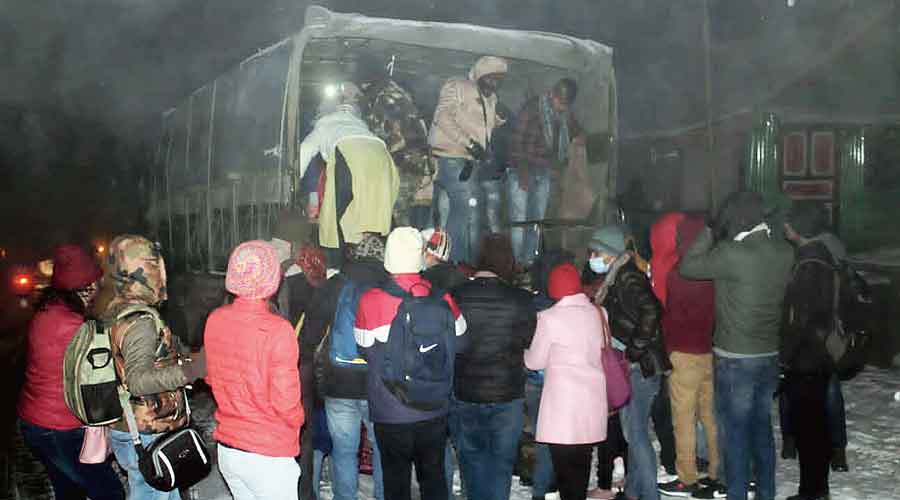 Rescued tourists board an army vehicle in East Sikkim near the Chhangu Lake on Saturday evening.
Telegraph photo.
AVIJIT SINHA And RAJEEV RAVIDAS   |   Siliguri   |   Published 27.12.21, 01:46 AM

Over 1,000 tourists stranded  in heavy snowfall at the Tsomgo (Chhangu) Lake and Nathu-la on the upper reaches of East Sikkim near the India-China Border on Saturday afternoon were rescued by the Indian army in a few hours, kept overnight at a military camp and safely shifted to Gangtok on Sunday.

Owing to the snowfall, the  Sikkim state government on Sunday stopped issuing permits for Tsomgo Lake and for any place beyond Yumthang, which is in Mangan district (erstwhile North district) of the Himalayan state.

“Altogether, 1,027 tourists  got stuck in severe snowfall in areas of Nathu-la, Tsomgo Lake and adjoining areas on Saturday afternoon. It brought down the temperature to sub-zero levels. After the heavy snowfall, vehicles started skidding on the Jawaharlal Nehru Marg that connects these areas with Gangtok. The tourists in around 120 vehicles got stranded over a stretch of 15km,” army sources said.

Army personnel of the Black Cat Division posted in the area  intervened. They rescued the tourists in army vehicles and shifted them to the military camp near the 17th Mile.

All the tourists were given hot meals, warm clothing and critical medical support. They stayed at the camp overnight. On Sunday morning, tourists were sent to Gangtok.

“The tourists were brought to 13th Mile in army trucks and then transshipped to Gangtok in taxis. By late Sunday evening, all stranded tourists were safely evacuated to Gangtok,” said a source in the state police.

A tourist from Bangalore, who got stuck due to the snowfall, narrated his experience.

“We had plans to visit Tsomgo Lake, Nathu-la and Baba Mandir but we got stuck a little short of Tsomgo Lake from about 11.30am to 5pm on Saturday in snow. The Indian army came to our rescue. It is because of them that we are safe,” he said.

Another tourist from South 24-Parganas said had the Indian army and Sikkim Police not come to their aid, they would have been in dire straits.

“We walked down a kilometre or two from where our vehicle was stuck. It was very difficult to walk on snow. I slipped and fell many times,” he said.

The Sikkim government is taking no risks. “We will start issuing passes only after the weather improves and the snow clears,” said a Sikkim tourism official on Sunday.