'I have been invited to the event. I had attended it earlier and will be there this time as well' 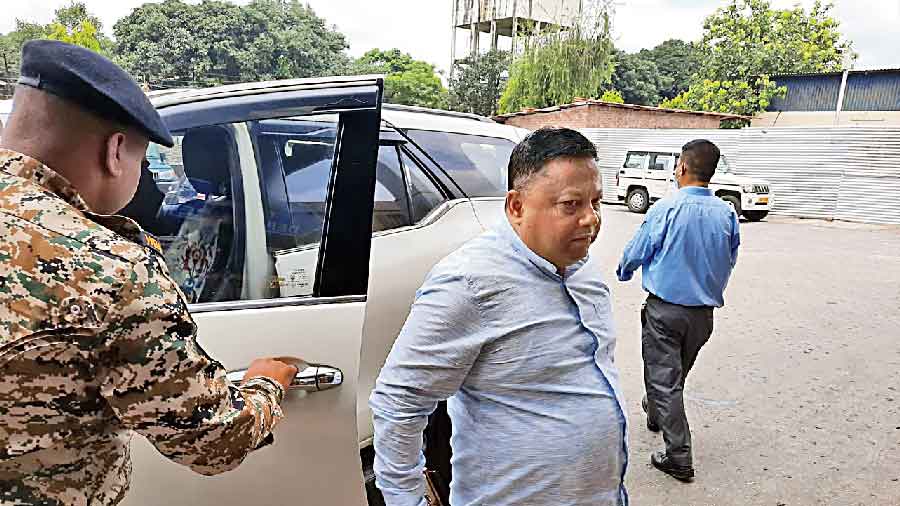 Anit Thapa at Bagdogra airport before taking a flight to Calcutta on Tuesday
Passang Yolmo
BIRESWAR BANERJEE AND BINITA PAUL   |   Siliguri   |   Published 20.07.22, 12:24 AM

Anit Thapa, the chief executive of Gorkhaland Territorial Administration (GTA), left for Calcutta on Tuesday to attend an administrative review meeting of the GTA.

Thapa said he will also attend the Martyrs’ Day rally of Trinamul on July 21 to which he received an invitation from Mamata Banerjee’s party.

“Tomorrow (Wednesday), an administrative review meeting of the GTA will be held in Calcutta. I will attend it,” said Thapa, who assumed office at the GTA last week.

Sources in the Bharatiya Gorkha Prajatantrik Morcha (BGPM), the party Thapa heads, said that ahead of the GTA polls, he had underscored that if voted to power, he will take up the task to expedite development in the hills, work for the interest of tea workers and put in effort to create job opportunities for local youths.

“He must have chalked out some plan to meet the promises. Tomorrow is the first review meeting of the hill body after the new board came to power in the GTA. Many important issues are likely to be discussed at the meeting,” said an insider.

On Thursday, Thapa will reach Esplanade to attend Trinamul’s public meeting. “I have been invited to the event. I had attended it earlier and will be there this time as well,” he added.

Though the BGPM didn’t forge a formal alliance with Trinamul for the GTA polls, the party’s bonhomie with Trinamul is evident as the chief minister turned up in the hills to attend the swearing-in of Thapa and the other elected members. Trinamul had asserted that their five winning candidates in the GTA will support Thapa from outside.

In Siliguri, preparations are on in full swing as the Trinamul leadership has planned to take around 15,000 party supporters to Calcutta for the July 21 meeting, to be held after a two-year gap caused by the pandemic.

“Around 15,000 people will attend the meeting from Siliguri sub-division. Our national general secretary Abhishek Banerjee has made it clear that there should be considerable presence of supporters from north Bengal districts. Accordingly, we are putting in all effort to ensure it. Among those who will go from here (Siliguri and surroundings), close to 50 per cent are women,” said Papiya Ghosh, the Darjeeling (plains) district Trinamul resident.

Ghosh said party supporters have started leaving for Calcutta since Monday by bus, trains and cars.

Party insiders said that recent wins in the Siliguri civic polls and three-tier elections of Siliguri Mahakuma Parishad have indicated revival of the party’s support base in the region where the BJP had emerged as a reckonable political force.

“At the civic and rural polls (of Siliguri), we have won in areas where the BJP won in the Assembly elections just a year back. This is the time when we should start consolidating our support base as the panchayat and Lok Sabha elections are ahead,” said a senior party leader.