Adhikary kin stays away from Mamata rally in Midnapore 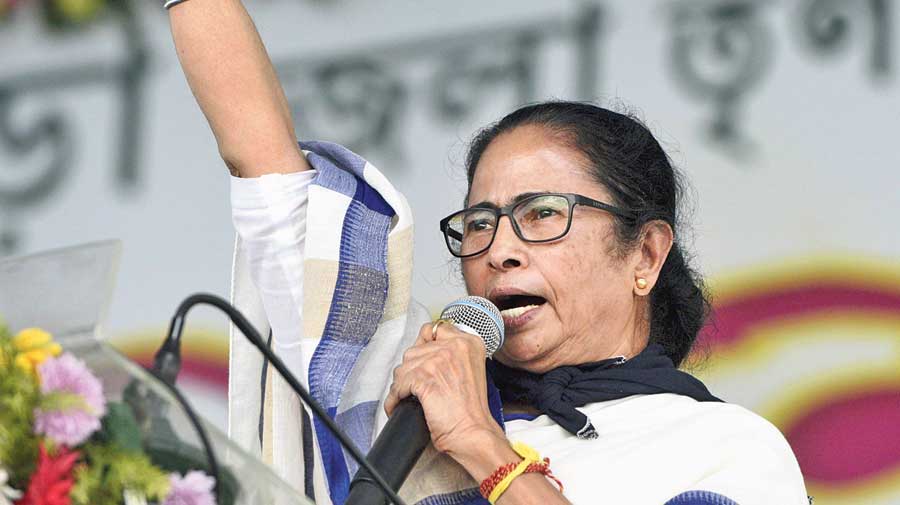 The rally at the Midnapore College Ground was held at a time when the rift between the TMC and Suvendu Adhikari has widened.
File picture
Our Bureau, Agencies   |   Midnapore   |   Published 07.12.20, 04:32 PM

Amid speculations over rebel TMC leader Suvendu Adhikari's next move, his politically influential family gave Chief Minister Mamata Banerjee's rally in their stronghold on Monday a miss, prompting her to accuse the BJP of trying to break her party by using "moneybags".

Adhikari recently quit as a minister and said it was difficult for him to work with the TMC leadership. A series of talks with interlocutors appointed by Banerjee failed to pacify the leader.

Not just Suvendu, but the entire Adhikari family, father Sisir Adhikari and brothers Dibyendu and Soumendu, were conspicuous by their absence. Sisir and Dibyendu Adhikari are TMC MPs from Tamluk and Kanthi Lok Sabha seats and Soumendu is an MLA from East Midnapore.

Their loyalists also largely stayed away from the rally.

"All TMC MLAs of West Midnapore are present here today. I want to tell those who spread canards against TMC leaders that we are the most honest party. We are not like the BJP which is using its moneybags to dislodge opposition-run governments in states and trying to break opposition parties," Banerjee told the rally.

Calling the TMC "a hard nut to crack" that will not surrender before the saffron party, Banerjee, without naming anyone, said she would also not give in to attempts to "blackmail and bargain" her party ahead of the polls.

"Those who are corrupt are now joining the BJP. CPI(M) goons now have switched sides and are working as cadres of the BJP," she alleged.

Banerjee had recently issued a stern warning to those indulging in anti-party activities and asked TMC leaders in touch with the opposition to quit the ruling party instead of weakening it.

The rally at the Midnapore College Ground was held at a time when the rift between the TMC and Suvendu Adhikari has widened. After the failed talks, the TMC had said the rapprochement efforts were a "closed chapter".

Adhikari last week organised a rally without the TMC banners and flags at Garbeta in West Midnapore district.

The Adhikari family wields influence over at least 40 -45 assembly seats in West Midnapore, Bankura, Purulia and Jhargram, parts of Birbhum -- mainly in the Junglemahal region and areas in minority-dominated Murshidabad.

Elections to the 294-member Bengal Assembly are likely to be held in April-May next year.