AC bus to Howrah from Karunamoyee 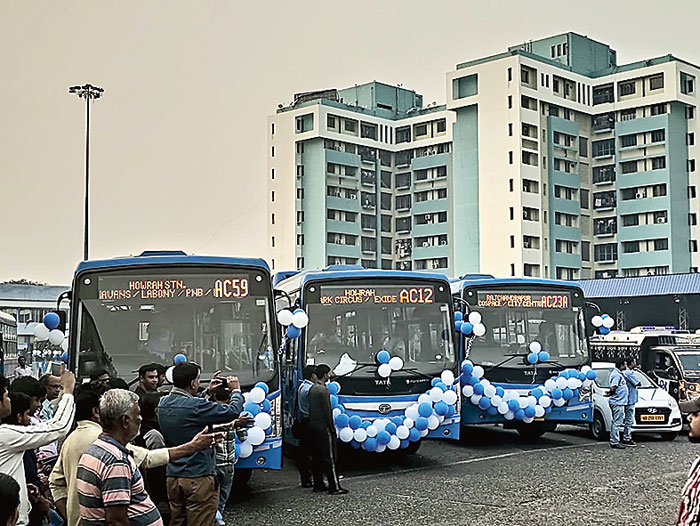 Residents of Salt Lake have got a new year gift in the form of an air-conditioned connection to Howrah station. The West Bengal Transport Development Corporation launched a route on Wednesday that will ply from Karunamoyee to Howrah. The route has been named AC 59 and will have five buses playing on it.

The buses will start from the Karunamoyee bus depot and will take the road in front of Bikash Bhavan via Laboni, PNB, Hudco crossing, Kankurgachhi and Girish Park to reach Howrah, said a transport department official.

Five more buses were added on two existing routes — AC 12 and AC 23A. Of them, AC 12, having eight to 10 buses plying from Howrah to Shapoorji Pallonji, got two buses more, while AC 23A, running a similar number of buses from Karunamoyee to Rajchandrapur (beyond Dunlop), got three more buses.

The buses are being introduced on the basis of a report by RITES which did a survey over the past couple of years and recommended optimisation of routes. “The report indicated demand on this route and hence we have adopted the recommendation,” the official said.

The route was launched by transport minister Suvendu Adhikari from the department’s depot in Kasba. The buses will be docked at a new depot near Pride Hotel in New Town.

The 10 air-conditioned buses will add to the transport department’s fleet of about 70 electric buses that are plying on several routes across the city. “Once fully charged they can run 100km. They are more cost-efficient than the diesel-run buses.”

The minimum charge of tickets on these buses is Rs 20. The new route will operate from 8am to 8pm.

GPS in buses within 6 weeks