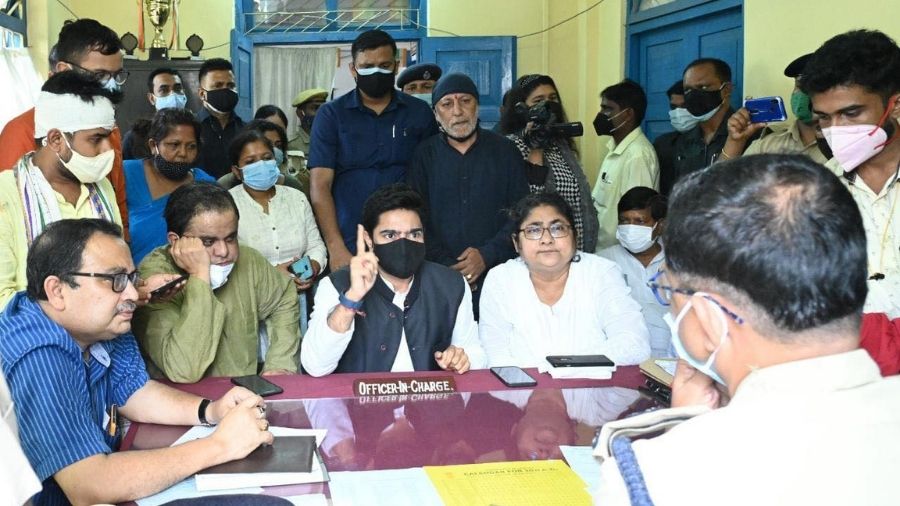 A case has been registered in Tripura against TMC national general secretary Abhishek Banerjee, MP Dola Sen, Bengal education minister Bratya Basu and other senior leaders of the party for allegedly obstructing police officers from performing their duties.

Kiran Kumar, the superintendent of police (SP) in Khowai district, said a suo moto complaint was filed on Tuesday against the TMC leaders, who had "misbehaved" with officers on duty on August 8.

We booked them on August 10 under Section 186 (obstruction of public servants in the discharge of his public function) and 36 (common intention) of the IPC. The FIR pertains to entry into the Khowai police station... They will be summoned, the SP stated.

Claiming that the ruling BJP in Tripura was "scared" of his camp's growing popularity, TMC's Bengal general secretary Kunal Ghosh, who figures in the list of leaders booked by the police, told reporters in Calcutta, "A case has been wrong fully registered against us. We went there to stand by our party workers."

At least 14 leaders and workers of the Trinamool Congress (TMC) were arrested in Khowai district on Sunday, including those injured in an alleged attack by BJP men the day before, for flouting Covid-19 norms .

Shortly after, Banerjee, who is also Bengal Chief Minister Mamata Banerjee's nephew and the de facto number 2 in the party, flew to Agartala to meet the apprehended workers in Khowai police station, along with other leaders.

Those arrested were later produced before a local court, which granted them bail.

According to the police, the 14 TMC members were nabbed for venturing out after the imposition of night curfew at 7 pm, in violation of the Covid-19 restrictions.

In a video that went viral on social media, the TMC national general secretary was seen raising his finger to enquire why his supporters were arrested after having faced assaults.

He returned to Calcutta the same day after his party workers were released on bail.

"Bail granted to all @AITCofficial workers who were arrested in Tripura. Satyameva Jayate! I'll be taking them to Kolkata as they have sustained severe injuries & were denied medical attention. @BjpBiplab you can keep trying but all your resources will fall short! MARK MY WORDS," Abhishek tweeted just before flying out of Agartala.

Subal Bhowmik, a TMC leader from the northeastern state whose name figures in the FIR, claimed that his party's activists were being harassed and falsely accused of crimes they did not commit.

"We didn't obstruct any police officer from performing their job. It was only after 48 hours, they decided to book us under section 186. These allegations are baseless and the police administration is being misused for political gains, Bhowmik added.