Though the CM laid stress on continuing the welfare schemes, Union home minister Amit Shah criticised the state government for its poor management of finances 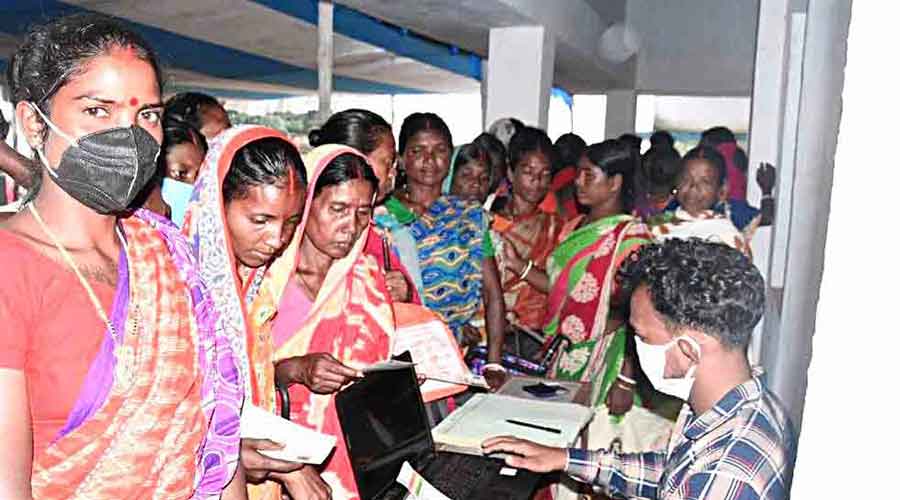 Chief minister Mamata Banerjee on Thursday included another 20 lakh women under the “Lakshmir Bhandar” scheme, taking the total number of beneficiaries of the state government's outreach programme to 1.71 crore.

“These women had applied through Duare Sarkar camps. It takes some time to process the applications before including the applicants under the scheme. We had promised to launch the scheme before the polls and we kept our promise,” said the chief minister at a programme to handover benefits to new beneficiaries at Netaji Indoor Stadium on Thursday.

The chief minister explained that the Lakshmir Bhandar scheme was launched to acknowledge the efforts of women, who played a critical role in running households smoothly.

Mamata also said the state government spent heavily on welfare schemes to ensure that no one missed out on getting benefits offered by the government.

“Our government reaches out to every walk of the society. We reach out to people with old-age pension, widow pension and several other facilities, including assistance to farmers with the Krishak Bandhu scheme and students with Kanyasree,” the chief minister said.

Sources in the government said the main focus of the government was to run welfare schemes smoothly as it ensures cash in the hands of common people, an aid that helped them during the pandemic.

“The government spends nearly Rs 30,000 crore annually to run the welfare schemes. Now, the primary focus of the government is to run the schemes properly as these help people living in remote areas as well as the poor," said a senior government official.

The chief minister also mentioned the schemes — from providing shoes to schoolchildren to ensuring scholarship to girl students under Kanyasree — that her government has introduced after coming to power in 2011.

“I am proud of what I have done so far,” Mamata said.

Sources in Nabanna said these days 16.9 lakh people get old-age pension and 21 lakh women get widow pension. Besides, 5.5 lakh physically-challenged people get pension from the government in addition to more than 25 lakh girls registered under Kanyasree scheme.

“This is no less of an achievement. Even though the state's coffers are stressed to run the schemes, the chief minister made it clear that she would continue to focus on the schemes as these help common people,” said a bureaucrat.

Though the chief minister laid stress on continuing the welfare schemes, Union home minister Amit Shah criticised the state government for its poor management of finances.

“Back in 1947, Bengal used to contribute 30 per cent of the national GDP and in 2022, it has come down to 3.3 per cent. Also, the percentage of FDI in Bengal was one per cent in 2011 and even now, it is the same,” he said during a public meeting in Siliguri on Thursday.

Sources in the state government said that the state’s finances were in a better position compared to the country.

“The state’s estimated GSDP growth is more than 11 per cent compared to national GDP growth of nine percent. So, the Union home minister’s accusations are rather political and not based on facts,” said a senior finance department official.

Though no one from the government reacted officially to the comments of the Union home minister, a senior official pointed out that the debt-GDP ratio has not increased even though the volume of borrowing has increased.