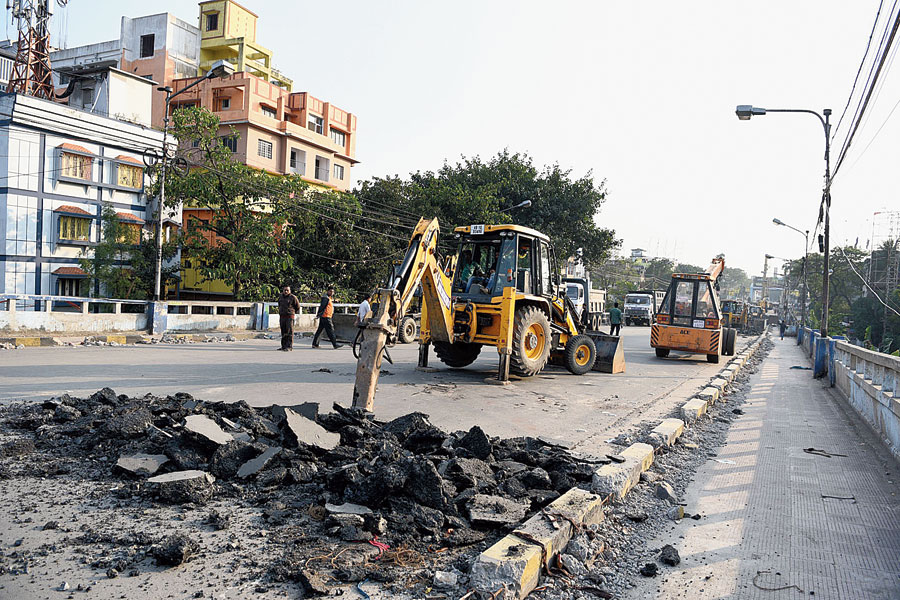 Vehicles headed for Bagbazar from BT Road will move through the Lockgate flyover from 6am to 1pm and in the reverse direction from 1pm till midnight, according to a new traffic diversion plan drawn up by police.

The decision came two days after a plan to let Bagbazar-bound vehicles from BT Road move through the flyover throughout the day flopped, resulting in northward traffic crawling on Central Avenue during the evening rush hour.

The closure of the Tallah bridge, which was a key link between the city and the northern fringes, for demolition has necessitated the traffic diversion plan.

“We have decided to change the diversion plan keeping in mind the traffic flow pattern around the Lockgate flyover throughout the day and to reduce the load on the Belgachhia bridge,” Rupesh Kumar, deputy commissioner, traffic, told Metro on Friday. “The new diversion plan comes into effect immediately.”

In the revised traffic diversion plan, BT Road-bound traffic would move along Cossipore Road towards Chiria More on BT Road from 6am to 1pm. Bagbazar-bound vehicles from BT Road will ply through the flyover during the period.

From 1pm till midnight, BT Road-bound vehicles from Bagbazar will move through the flyover and Bagbazar-bound vehicles will take a right turn at Chiria More and ply down Khagen Chatterjee Road and Cossipore Road.

The traffic flow around the Tallah bridge has been under scanner for some time as police are struggling to find the right pattern that would work during both morning and evening rush hours.

First, it was decided that all BT Road-bound traffic from south would be allowed to take the Lockgate flyover from Girish Avenue throughout the day.

The Bagbazar-bound traffic from BT Road, according to the initial plan, would take a right turn from Chiria More and travel down Cossipore Road to reach Bagbazar.

The plan did little to reduce the load on the Belgachhia bridge because buses kept taking a circuitous route through Dum Dum Road and Milk Colony to reach the Shyambazar five-point crossing.

On March 10, a railway level crossing was opened on the little known Jagannath Ghat Road, which merges with Cossipore Road and can be accessed from Girish Avenue in Bagbazar. The police decided to divert all BT Road-bound buses, buses, minibuses and other heavy vehicles from Bagbazar through this stretch. The system came into effect on Tuesday.

The same day, the Lockgate flyover was thrown open to all Bagbazar-bound vehicles from BT Road throughout the day.

What initially looked like an effective diversion plan failed in the evening with vehicles struggling to move down Cossipore Road towards BT Road, resulting in snarls on Girish Avenue.

The impact was felt on Central Avenue as well, prompting the police to divert Cossipore Road-bound vehicles from Bagbazar towards the Belgachhia bridge through the Shyambazar five-point crossing.

“Traffic headed for BT Road down Cossipore Road was not draining out easily because of two-way movement on Khagen Chatterjee Road, which connects BT Road with Cossipore Road,” said a senior officer of Calcutta police.