Sikkim: Over 400 tourists rescued from Nathu-la after snowstorm

They were provided with accommodation and among them, 26 had to be hospitalised as they needed critical medical support 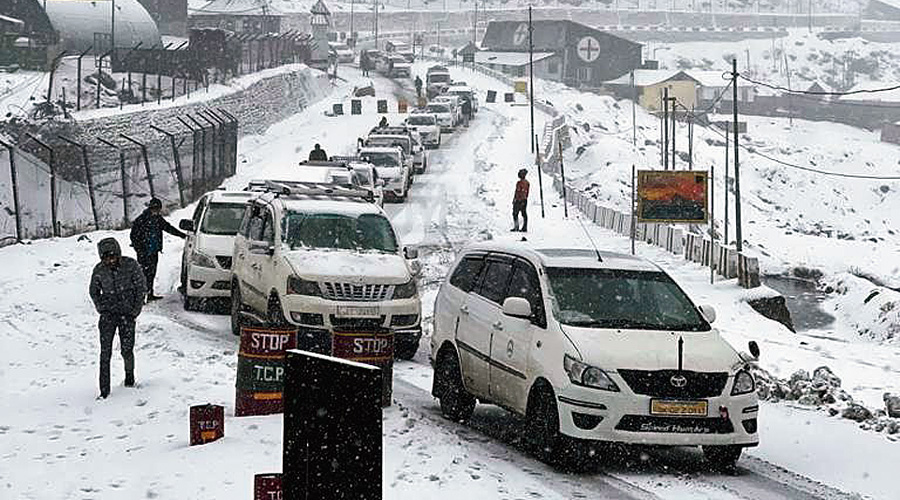 Over 400 tourists who had been stuck in the upper reaches of East Sikkim near the China border at Nathu-la following a snowstorm on Thursday were rescued by the Indian army and were provided with food, accommodation and medical support.

Sources said a severe snowstorm had occurred in areas like Nathu-la, Tsomgo (Changu) Lake and adjoining areas on Thursday afternoon, bringing down the temperature to sub-zero levels.

“After the snowstorm, the vehicles started skidding on the Jawaharlal Nehru Marg that connects these areas with Gangtok. Altogether, there were 447 tourists in 155 vehicles, who got stranded over a stretch of 15km,” said a source.

As it was risky to drive along the mountainous road in such adverse weather, the tourists and cab drivers got stranded.

This made the army personnel posted in the area intervene. They rescued the tourists in army vehicles and shifted them to the military camp located at 17th Mile.

All the tourists were provided with accommodation and among them, 26 had to be hospitalised as they needed critical medical support.

“It is good that there were no major injuries. All of them were also provided with food,” the source added.

As the situation improved, the tourists were sent back to Gangtok.

A few days ago, a group of eight tourists caught in snow had been rescued by the army.

“These days, snowfall has become almost regular in the upper reaches of Sikkim, particularly in East and North districts. Hundreds of tourists are pouring in to enjoy the snowfall,” said a tour operator in Gangtok.

Tour operators have appreciated the endeavour of the defence personnel. “The army helped tourists in Sikkim whenever they were in distress. We thank them,” said Samrat Sanyal, general secretary, Himalayan Hospitality & Tourism Development Network.