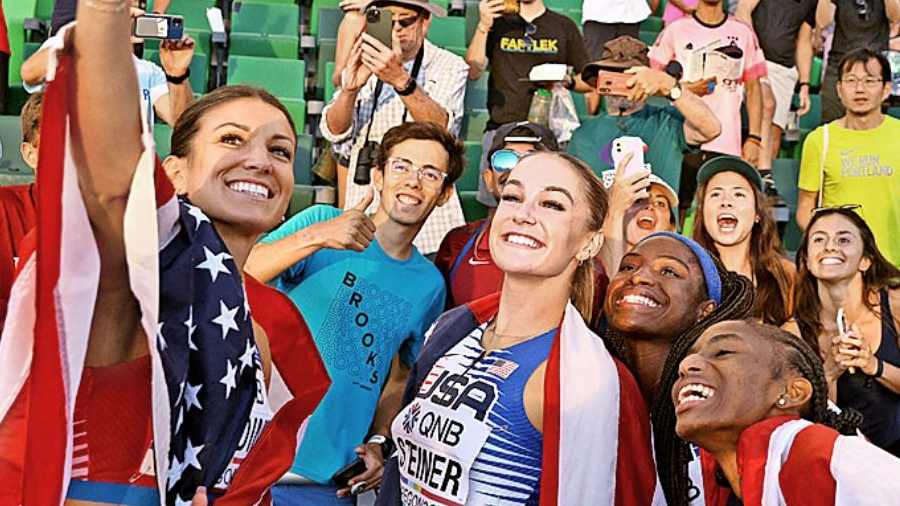 The American women’s sprint relay quartet pulled off a stunning upset over Jamaica at the World Championships on Saturday while a flubbed baton handover proved costly for the US men’s team as they finished second to Canada. Jamaica were anchored by new 200 metres champion Shericka Jackson but Twanisha Terry ran a terrific final leg to bring home the hosts’ 10th gold medal in Eugene. “It’s just an amazing feeling,” Terry said.

“The race was electrifying. The stadium went crazy.” Germany took a surprise third-placed finish after Britain’s Dina Asher-Smith pulled up injured. The US had looked set to retain the men’s title until Elijah Hall and Marvin Bracy lost time with a slow exchange, the latest disappointment for a country with incredible depth of sprinting talent. Andre De Grasse, the Olympic 200m champion, beat Bracy to the finish line while Britain collected bronze. “It’s special to win here. There are many Canadians cheering us on. It’s not on home soil, but it felt like it,” De Grasse said.

Korir ran a textbook tactical race to win the world 800 metres title as he peaked at just the right time after a wretched season. Korir arrived in Eugene with barely a race to his name but ran himself into form through the rounds.

In Saturday’s final he sat near the back of the tightly-bunched pack for 600m before putting his foot down, sweeping past most of them on the bend then overhauling fading leader Marco Arop on the home straight. He won in one minute, 43.71, with Algerian Djamel Sedjati producing a storming finish of his own to take a surprise silver in 1:44.14 ahead of Canada’s Arop (1:44.28).

“I was expecting a faster race, but I won and I am very happy,” said Korir. “I knew there were some guys close behind me in the last 100m. I was expecting someone to come, but no one did. “It’s been a long wait. I failed in 2017 and 2019 but I’ve made it now,” added Korir, who failed to get past the semi-finals in the last two worlds. Arop ran a brave race, hitting the front early and stretching the field, and said his bronze felt like redemption after failing to reach the Olympic final when fancied for a medal.

“It rights some of the wrongs from last year - I feel I had to take a step back to take two steps forward,” he said. “Last year was a big learning lesson and I am glad I was able to come back from that. I knew if I left it to the last 150m I would have had some trouble closing. I tried to make my move early and take some people out of the race. Korir was strong enough to come back. Both medallists are strong finishers so I had to make sure I held some other runners and I think I gave it my all.

“Unfortunately, it was not enough to win gold, but good enough to win come back with a medal.” Warner was in firm control of the decathlon after the first four events but his hopes of winning a first world title were dashed after an injury in the 400m, with Puerto Rico’s Ayden Owens-Delerme moving into the overall lead. Ethiopian Gudaf Tsegay held off late challengers to win the women’s 5,000 metres as world record-holder Letesenbet Gidey faded down the straight to miss the podium. Tokyo bronze medallist Tsegay traded the lead with compatriot Gidey, the world 10,000m champion, throughout the race until the pack took off for the final lap. The Netherlands’ 5,000m Olympic champion Sifan Hassan, known for her ferocious kick, picked up the pace before delivering a challenge with 200m to go as she wove to the inside, but could not maintain her speed as Tsegay charged down the final straight.

“I have been training well for 1,500m and this helps spring on the home stretch,” said Tsegay, who collected silver in the 1,500m earlier in the meet. “This win is for all of Ethiopia.” Kenyan Beatrice Chebet moved up in the final 200m for silver and Ethiopian Dawit Seyaum finished with bronze. “It was a matter of tactics. I was well positioned,” said Chebet.