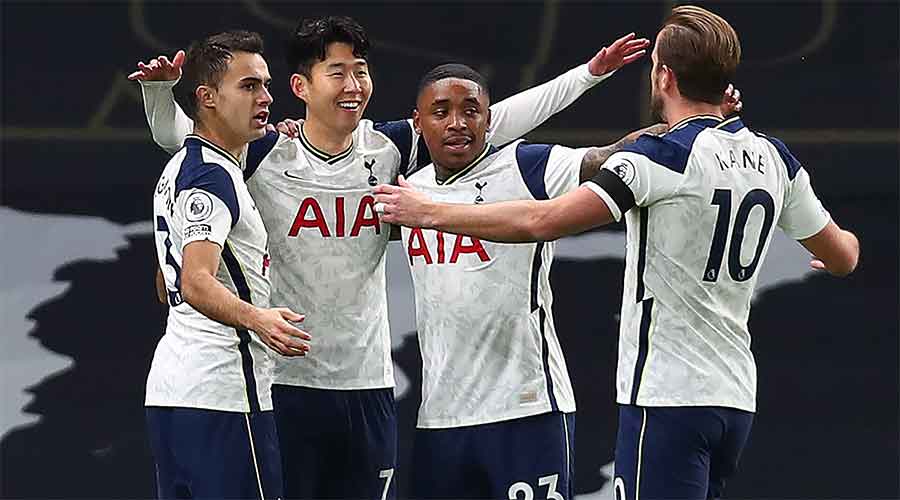 Tottenham Hotspur moved to top of the Premier League after a classic Jose Mourinho-inspired performance delivered a 2-0 victory over Pep Guardiola’s Manchester City on Saturday.

Goals in each half from Son Heung-min and substitute Giovani Lo Celso, secured the three points and a fourth straight league win for Spurs, who are two points ahead of second-placed Chelsea.

Mourinho’s men grabbed the lead in the fifth minute when Son got round the back of City’s defence to latch on to a perfect, lofted pass over the top from Tanguy Ndombele and slip the ball through the legs of the advancing Ederson for the South Korean’s ninth league goal of the season.

Harry Kane had the ball in the net in the 13th minute, slotting home from Son at the end of a sweeping move but the effort was disallowed for offside.

City were frustrated when Aymeric Laporte drove home after being set up by Gabriel Jesus but referee Mike Dean, after reviewing the pitch-side monitor, ruled the Brazilian had handled.

The visitors enjoyed the bulk of possession without threatening the goal too often while a well-organised Spurs kept compact and looked to strike on the break.

That proved to be a wise tactic when Lo Celso, just 35 seconds after being introduced from the bench, was found by Kane and kept his cool to slip past Ederson, who again had rushed out of his goal.

The victory was the first time Mourinho has enjoyed back-to-back wins over his old rival Guardiola.

Chelsea recorded a 2-0 victory at Newcastle United, courtesy of an own goal by Federico Fernandez and Tammy Abraham’s second-half effort.

Frank Lampard’s side dominated before the break and took the lead in the 10th minute when Fernandez, under pressure from Ben Chilwell, turned in Mason Mount’s cross.

Chelsea really should have been out of sight with Timo Werner guilty of missing some gilt-edged chances, but Newcastle came alive after the break.

Isaac Hayden squandered a great chance to equalise on the hour, but a few minutes later, Werner burst through on goal before passing to Abraham to double Chelsea’s lead.

Sean Longstaff came close for Newcastle when his rising drive clipped the crossbar.

Brighton & Hove Albion celebrated their first Premier League victory since September after Danny Welbeck helped them to a 2-1 win at Aston Villa with his first goal for the club.

Solly March also netted a fine goal for the visitors to cancel out Ezri Konsa’s equaliser, as Brighton moved clear of the relegation zone.