Also mentioned are the results from other events from Day II 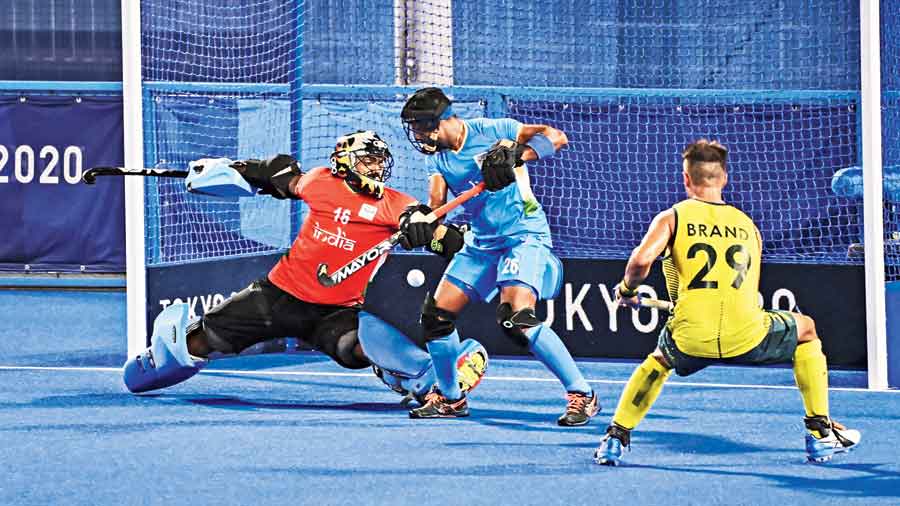 India goalkeeper P. R. Sreejesh attempts unsuccessfully to prevent a goal during a Pool A hockey match against Australia in Tokyo on Sunday. Australia won 7-1.
PTI
Our Bureau, Agencies   |   Calcutta, Tokyo   |   Published 26.07.21, 02:25 AM

A string of disappointments early on followed by a humiliating defeat in the afternoon ruined India’s Sunday at the Tokyo Olympics.

If the fancied shooting squad drew a blank for the second successive day, there was an early exit for tennis star Sania Mirza and her partner debutant Ankita Raina in women’s doubles.

And then in swimming two youngsters failed to qualify for the semi-finals in their respective events. Gymnast Pranati Nayak of Bengal also could not earn a berth in the all-round final.

But nothing was more debilitating than the 1-7 rout India suffered at the hands of world No. 1 Australia in men’s hockey.

The mighty Kookaburras simply toyed with the Indian defence after the first quarter and scored goals at will to comfortably secure their second consecutive win in the competition.

This was India’s biggest loss since Australian Graham Reid took charge of the team as coach in April 2019.

India’s lone goal was scored by Dilpreet Singh in the 34th minute.

Sania and Ankita dominated a large part of their opener against Ukrainian twin sisters Nadiia and Liudmyla Kichenok.

The duo were running away with the contest, but in a dramatic turnaround the Kichenok sisters came back from the dead to pull off a 0-6, 7-6 (0), 10-8 win at the Ariake Tennis Centre.

Pranati recorded a total score of 42.565 over the four categories — floor exercise, vault, uneven bars and balance beam — at the Ariake Gymnastic centre. She is now ranked at 29th overall at the end of subdivision 2.

Pranati hardly got any time to prepare after qualifying through the continental quota following the cancellation of the 9th Senior Asian Championships in China, due to the pandemic.

Swimmers Srihari Nataraj and Maana Patel’s campaigns came to an end as the two youngsters failed to qualify for the semi-finals of their respective events. Srihari managed a time of 54.31s to finish his men’s 100m backstroke heat in a creditable sixth place. Maana, finished with a time of 1.05.20 behind Zimbabwe’s Donata Katai.