Advertisement
Home / Sports / Serena Williams: An inspiration beyond the court

Serena Williams: An inspiration beyond the court

Williams will be remembered as an incredible tennis player, but her greatest legacy is what she did for Black women 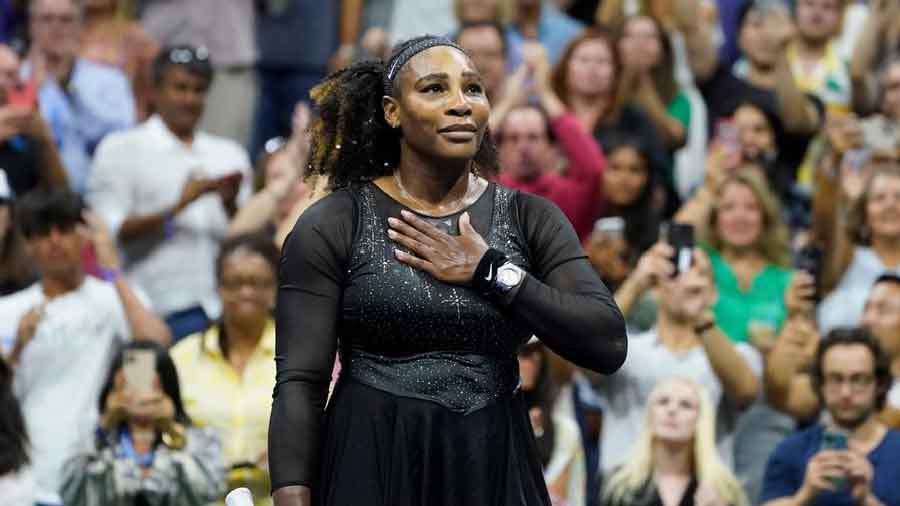 Williams will be remembered as an incredible tennis player, but her greatest legacy is what she did for Black women
Deutsche Welle
Jonathan Harding   |   Published 04.09.22, 03:18 PM

Serena Williams will be remembered as one of the greatest tennis players ever, but her greatest legacy is how she used her sporting success to change the lives of women, particularly Black women.

Serena Williams has walked off the tennis court one last time.

Williams, now 40 and having hardly played consistent, regular tennis in years, played her last match with the same joy of a child. Her US Open ended on Friday when she was eliminated in the third round by Ajla Tomljanovic 7-5, 6-7 (4), 6-1.

At the end of Friday's lengthy match, Williams waved to the crowd, putting her hand over her heart.

It's about the first African American woman to win a Grand Slam tournament in the Open Era and changing the game for her community, becoming an icon and forcing people to change the way they viewed women in sport, in particular Black women.

After an unconventional rise to prominence in tennis, Williams has never shied away from being a Black woman in a predominantly white, male sport.

In 2016, when Philando Castile and Alton Sterling were killed in the US, Williams posted a message on Facebook saying she would not be silent. That same year, Serena and her sister, Venus, opened a community center in her childhood home of Compton, California to offer therapy to residents affected by violence.

Two years later, Serena Williams showed support for how much football player Colin Kaepernick had done for the African American community, saying she was "especially proud to be a part of the Nike family today" when Nike decided to select the former NFL quarterback as the brand's advertisement role model.

Earlier this year, Williams wrote an essay for Elle magazine, revealing that she nearly died while giving birth.

"In the U.S., Black women are nearly three times more likely to die during or after childbirth than their white counterparts. Many of these deaths are considered by experts to be preventable. Being heard and appropriately treated was the difference between life or death for me; I know those statistics would be different if the medical establishment listened to every Black woman's experience."

Sadly, the world of tennis has also tested Williams' resolve.

In the 2001 final at Indian Wells, Williams was booed consistently in an uncomfortable atmosphere. In his autobiography, Williams' father, Richard, said that racial slurs "flew through the stadium" at him and his daughters. Serena Williams would boycott Indian Wells for the next 13 years.

In the 2004 US Open quarterfinal, Williams lost to Jennifer Capriati after controversial line calls. It was a match that played a huge role in the arrival of Hawk-Eye in tennis, a computer vision system used to track the trajectory of the ball, and left Williams traumatized.

"The reason Hawk-Eye became a thing was because they were calling my balls out and they weren't even close to the line," Williams recently said on a podcast with Meghan Markle, the Duchess of Sussex. "In that match, I gained this fear of hitting because every time I hit the ball, they would call it out no matter how close or far it was (inside the line)."

After losing her temper during the 2018 US Open final about what she felt was unfair treatment from the chair umpire, an Australian newspaper depicted Williams in a cartoon exaggerating her physical characteristics. The National Association of Black Journalists in the US denounced it as "repugnant on many levels."

Williams has also had to contend with being a successful Black woman in a sport dominated by men, a situation which she feels has created a different set of expectations.

"I can't win being someone different, I have to win being Serena and sometimes that means being more fierce... But is it fierce when guys are saying 'come on' or pumping their fists? It's exciting. But for me, it's aggressive," she told Meghan.

Beyond the double standards of the tennis court, Williams also feels she has been challenged over being an ambitious woman.

"Often women are put in these different boxes when we are ambitious or when we do have goals or when we reach our goals there's a negative connotation on how we reach those goals," she said.

One of Williams' goals was to equal the 24 Grand Slam titles won by Australian player Margaret Court. Four lost finals in 2018 and 2019 ended that dream, but many of the goals Williams achieved went beyond titles.

On the podcast interview with the Duchess of Sussex, Williams revealed that the night before a match at the French Open in 2018, her daughter Olympia fell out of her high chair and broke her wrist. Williams spent most of the night awake, devastated at what had happened. Not only did she win the next day despite being emotionally drained, she did so wearing a black catsuit (for media reasons), once again inspiring people and changing the game at the same time.

Williams has said what happens next is less of a retirement and more of an evolution.

"To not do that [professional tennis] anymore, it is exciting, I am really looking forward to it," she said. "I cannot wait to wake up one day and literally never have to worry about performing on such a high level and competing. I have never felt that."

Williams may indeed have lost the match, and tennis might have lost one of its greatest players. But all those who ever watched or listened to Serena Williams have won, such was the magnitude of her greatness.