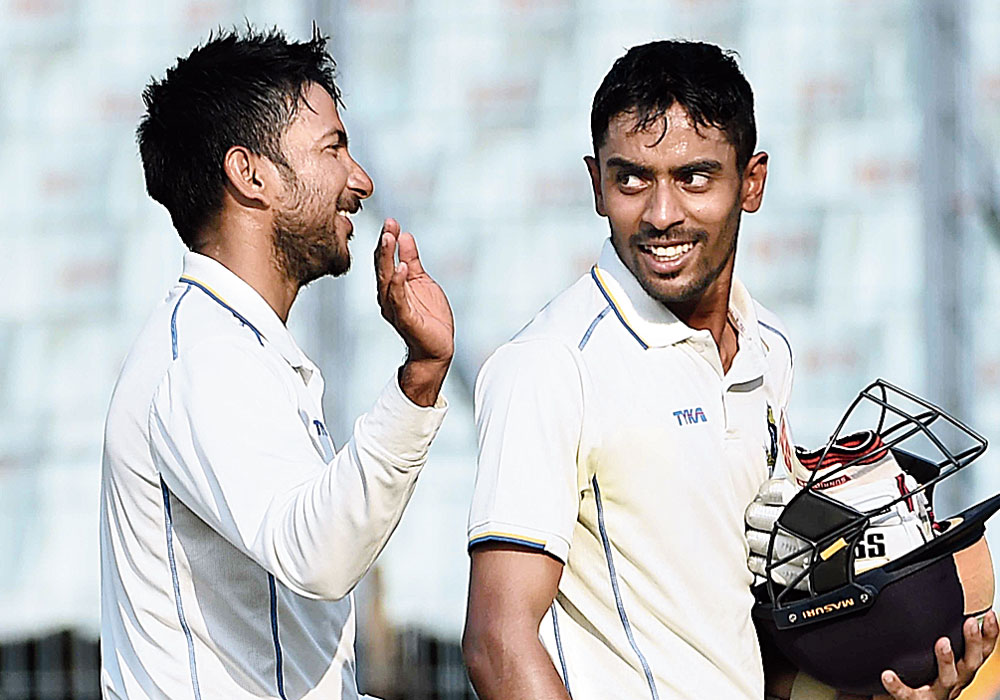 Abhimanyu Easwaran and Anustup Majumdar walk back to the pavilion after guiding Bengal to a 7-wicket win over Delhi, at the Eden, on Wednesday.
Picture by Santosh Ghosh
A Staff Reporter   |   Calcutta   |   Published 02.01.19, 10:53 PM

In these days of ‘emoticons’, one couldn’t help but think of the Wednesday evening scene at Eden Gardens as one giant ‘smiley’, signifying the good things that life offers us at times.

Manoj Tiwary taking a long walk across the ground to oblige a bunch of young autograph-seekers, Ashok Dinda delivering the broadest of smiles every time the official broadcasters’ camera focused on him, the players jumping on to the ground at the end of play for a some football and fun, friends and families of the players paying a happy visit and of course, the customary team selfie in keeping with the times — that was Bengal after their seven-wicket win over Delhi in the crucial Ranji Trophy Elite Group B match.

Contrast that with how the Eden looked on Monday evening. After the second day’s play had ended, a day which saw the Bengal batsmen implode playing mindless shots and thereby concede the first-innings lead to Delhi, the hosts’ dressing room looked like a medieval fortress. The window curtains were rolled down, perhaps to keep the ever-curious media glance away after a disappointing day. “Very poor” was how team mentor Arun Lal had described the performance.

But that seemed to be a memory of the distant past after 48 hours as Bengal not only won the match, they did so in superb style, accomplishing their highest-ever run chase in the Ranji Trophy.

What made the good work look even better was an epic innings from Abhimanyu Easwaran under pressure. The opener’s unbeaten 183 (23x4, 2x6) was the reason why Bengal could reach the target of 322 with more than an hour’s play remaining. Anustup Majumdar should also get credit for standing firm in a crisis, scoring 69 not out (4x8) and sharing a match-winning, unbeaten 186-run partnership with Abhimanyu.

It was in every way a well-deserved win. Hard-earned too, though the seven-wicket margin would give the impression that Bengal had it fairly easy. But that would be farthest from the truth.

With the pitch having no treasures for the bowlers, chasing down 322 was never going to be impossible. But at the same time, going after a 300-plus target in the fourth innings would be difficult even in ‘book cricket’.

Bengal began on the brightest of notes possible as the openers — Abhimanyu and Abhishek Raman — seemed to be confidence personified. Barring one or two odd occasions, they looked in control and were scoring at a decent rate as well.

It is often said in such situations that the first hour of play in the morning decides the course of the day. Bengal had negotiated the ‘question hour’ pretty well and were well on the path of dominating the entire first session too. But some 15-20 minutes before lunch, things changed completely.

Bengal were 121 without loss, with both Abhimanyu and Abhishek having completed their respective fifties when the latter went for an unnecessary shot off the part-time bowling of Delhi captain Nitish Rana. The resultant inside-out hoick over the cover region was misdirected and was caught by Akash Sudan. It was almost criminal of Abhishek (52) of playing such a reckless shot just before lunch.

That seemed to wake up Delhi from their early morning stupor and suddenly left-arm pacer Kulwant Khejroliya seemed like a Zaheer Khan of early 2000s.

Khejroliya first trapped Sudip Chatterjee plumb in front when he had faced just eight deliveries and made two runs. Despite his first-innings fifty, Sudip still looks as shaky as a colonial ruin.

The onus was on captain Manoj to pull the team up, but he lasted all of seven balls before being caught at slip off Khejroliya.

One feared the worst thereafter, more so because of how fragile Bengal’s batting has been this season. But Abhimanyu and Anustup never gave up. Brick by brick, they built their partnership. They first survived till lunch and then took the fight to the opposition camp picking up regular boundaries and stealing singles almost at will.

That Delhi lost their best bowler, Khejroliya, to an injury right after lunch, helped Bengal’s cause.

With 22 points from seven matches, Bengal are seventh in combined Group A and Group B standings. With top five to progress to the next round, Bengal will hope to get full points from their last match, against Punjab, too. The game, beginning on Monday, is likely to be played at the Eden and not at the JU Salt Lake campus ground as earlier scheduled. The Eden is now lucky for Bengal, that’s the ground reality.

Punjab are currently at the 10th spot, but have a strong side. Bengal would have bring on their ‘A’ game. And ‘A’ doesn’t stand for Abhimanyu and Anustup. The whole team will have to pull up their socks and plug the holes.

Otherwise, the smiles and smileys would change faces.