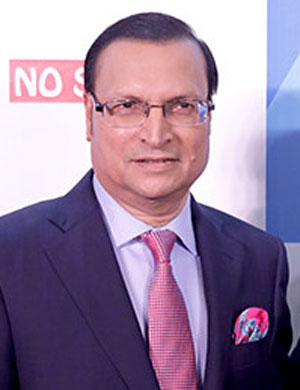 Rajat Sharma, the president of the Delhi & District Cricket Association (DDCA), has emerged as a strong candidate to head the Board of Control for Cricket in India (BCCI).

According to The Telegraph’s sources, Sharma enjoys the backing of an influential minister in the Narendra Modi government.

The Union minister is expected to play an important role in BCCI politics and take over the position enjoyed by Arun Jaitley, who passed away last month.

Jaitley, who wielded enormous clout in the running of the BCCI’s affairs, had also handpicked Sharma for the DDCA post.

The BCCI elections are scheduled for October 22 though uncertainty still persists over seven associations who have been deemed “non-compliant” to the eligibility criteria formulated by the Committee of Administrators (CoA).

When contacted, Sharma neither confirmed nor denied the development.

“I am very busy with tomorrow’s (Thursday’s) function where a stand will be named after Virat Kohli and the cricket stadium after Jaitley,” the DDCA president said on Wednesday.

Sharma, who took over the reins of DDCA in July 2018, is being seen as a “good choice” in several quarters as most of the former influential officials are ineligible to contest as per the new constitution.

“There is no one who can fit into the president’s role. Most of the prominent candidates are either over 70 or have already completed their nine-year tenure… Sourav Ganguly has 10 months left at the Cricket Association of Bengal (CAB) and will then have to go through a three-year cooling-off period before being eligible for a BCCI post,” said a former BCCI official.

The CoA has already set September 28 as the deadline for the state associations to hold elections.

According to the CoA, 18 of the 38 full members are in category A and have registered their respective constitutions. The CAB also falls in this category.

Nine full members of the BCCI, who have not yet submitted the registered constitution as approved by the CoA, are in category B.

“Only those full members of BCCI who have (a) registered their constitution, as approved by the CoA, (b) inducted former international players (male and female) as members in accordance with the directions of CoA, and (c) confirmed their membership structure, as required under the judgment (dated August 9, 2018), will be considered as compliant,” the CoA stated.

Seven full members — Uttarakhand, Arunachal Pradesh, Madhya Pradesh, Chhattisgarh, Karnataka, Haryana and Tamil Nadu — are being considered non-compliant on account of either (a) failure to get their respective constitution approved by the CoA or (b) failure to submit their amended constitution as sought by CoA.

“Legal implications will come to the fore if the CoA decides to go ahead with the elections without the apex court hearing our case. The CoA doesn’t have the right to deny voting rights to any association,” said a TNCA official.

In another development, the elections to Mumbai Cricket Association, which is run by an ad hoc committee, has run into trouble after D. N. Chaudhari has turned down the offer to be the electoral officer.

The last word in BCCI elections is never written until it is actually held.