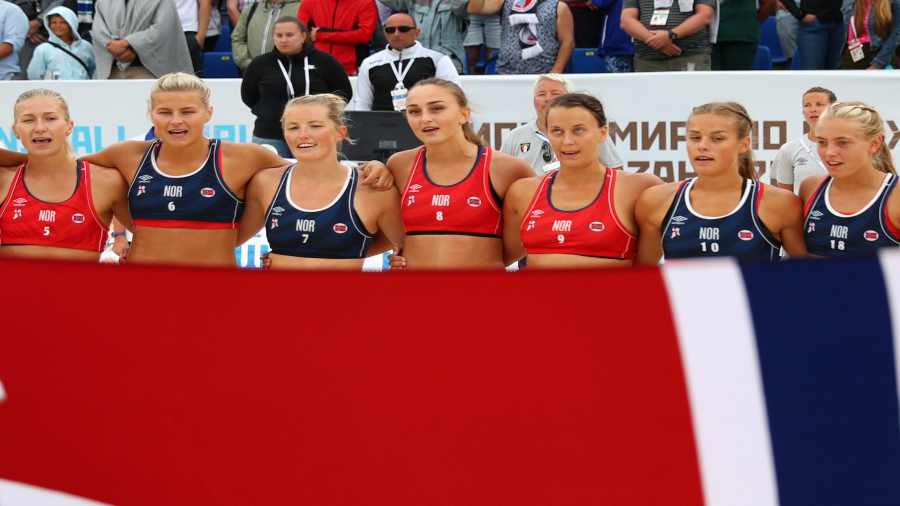 Norway’s women’s beach handball team was fined by the European Handball Federation on Monday, after players wore shorts, instead of the required bikini bottoms, during a game over the weekend.

The International Handball Federation requires women to wear bikini bottoms “with a close fit and cut on an upward angle toward the top of the leg.” The sides of the bikini bottoms must be no more than 4 inches. Men, on the other hand, can wear shorts as long as 4 inches above their knees as long as they are “not too baggy”. A spokesperson for the International Handball Federation, Jessica Rockstroh, said Tuesday that she did not know the reason for the rules. “We’re looking into it internally,” she said.

Rockstroh said that the organization’s focus at the moment was on the Olympics, not uniforms, and that the organization had not received official complaints previously. She later said Norway was the only country that had officially complained. “Globally we know that other countries like to play in bikinis, for example, especially in South America,” she said.

Norway’s team had been planning for weeks to flout the rules to point out the double standard for female athletes. The players wore shorts for Sunday’s bronze medal game against Spain at the European Beach Handball Championships in Varna, Bulgaria.

“I don’t see why we can’t play in shorts,” said Martine Welfler, one of the Norwegian players. “With so much body shaming and stuff like that these days, you should be able to wear a little bit more when you play.”

Kare Geir Lio, the head of the Norwegian Handball Federation, said the organization would pay the fine. He said Norway had repeatedly complained about the bikini bottom requirement to the international federation since 2006. “Nothing has happened,” he said.

Female athletes have spoken out against the double standards for their uniforms many times in recent decades. Women are required to wear more revealing outfits in several sports, including track and field, beach volleyball and tennis. In 2011, the Badminton World Federation decreed that women must wear skirts or dresses to play at the elite level in order to help revive flagging interest in women’s badminton.

In some cases, women have been fined for their uniforms being too long. In others, the uniforms have been too short.

During the English track championships over the weekend, Paralympian sprinter and long-jumper Olivia Breen said she was told by an official that the running briefs she was wearing were inappropriate.

“I was just chatting with my teammate, really happy, and this official came up to me and she was like, ‘Can I speak to you Olivia?’ ” Breen said Tuesday. “She was just like, ‘I think your briefs are too revealing and I think you should consider buying a new pair of shorts.’”

Breen said she was taken aback: “My first response was ‘are you joking?' And she just said, ‘No, I’m not. And I think you should honestly consider buying a pair of shorts.’”

The exchange left Breen and her teammate speechless, she added. “It just made me so angry,” she said. “We shouldn’t be told what we can wear and what we can’t wear. Why would you make a comment like that?”

Lio, of the Norwegian Handball Federation, said there was no reason women should be required to wear bikini bottoms in games. “Women should have the right to have a uniform they think is suitable for performing in their sport,” he said.

In a 2006 letter to the International Handball Federation, Norway’s handball federation said the requirement for women to wear bikini bottoms was insensitive to some countries’ cultural norms and could be embarrassing for those who did not want so much of their bodies exposed, according to a copy seen by The New York Times. In handball, a sport that combines elements of soccer and basketball, goalkeepers should be allowed to wear less-revealing uniforms because they use all parts of their bodies to block shots, the letter argued.

Welfler said there were players in Norway who did not want to compete at an international level because of uniform requirements. (In domestic tournaments, Norwegian players can wear shorts.)

“That’s really sad because maybe the best players won’t participate,” she said. She also said female players were tired of being scrutinized in skimpy attire. The focus should be on the game, she said.

Janice Forsyth, an associate professor of sociology at Western University in Canada and the former director of the university’s International Center for Olympic Studies, said that certain uniforms, especially in track and field and swimming, could give athletes an edge. But in the case of beach handball, wearing shorts instead of bikinis would not allow athletes to jump higher or move faster in the sand.

“I don’t see how that argument holds any weight,” she said. “To say that wearing less clothing, as the women are required to do, allows them to be better athletes is just silly.”