Zurich will be the season’s last competition, so the plan is to continue doing the same things which I’ve been doing, says Olympic gold medalist 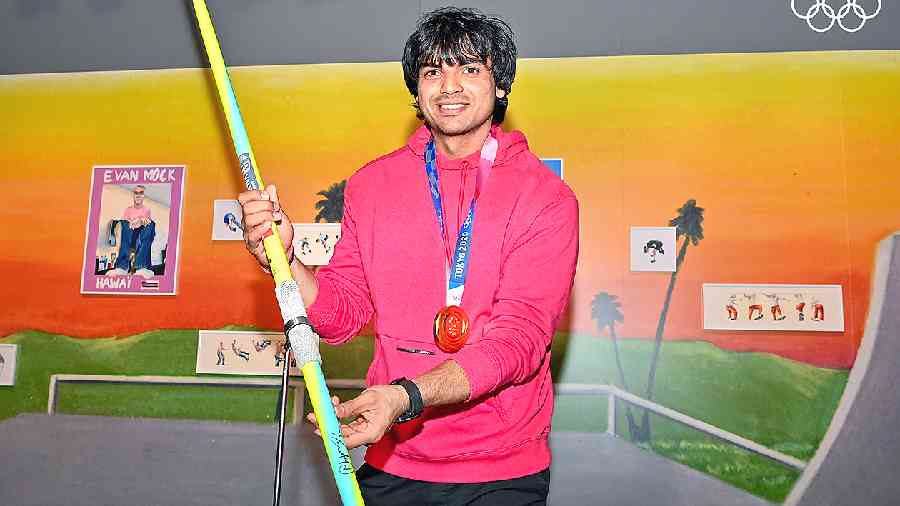 Neeraj Chopra with his Tokyo Olympic Games javelin at the Olympic Museum in Lausanne on Saturday. Neeraj gifted his javelin to the museum. India’s only other individual Olympic gold medallist — shooter Abhinav Bindra — was also present for the occasion.
Twitter
Our Special Correspondent   |   Calcutta   |   Published 28.08.22, 03:18 AM

Champion javelin thrower Neeraj Chopra said his focus will be to end the season on a high.

The Tokyo Olympic champion qualified for the season-ending Diamond League Finals to be held in Zurich on September 7-8, by finishing on top of the heap in the Lausanne meeting on Friday.

Neeraj’s first throw of 89.08 metres was enough to help him record his maiden firstplace finish in the League.

“Zurich will be the season’s last competition, so the plan is to continue doing the same things which I’ve been doing. It’s only 10 days, I don’t have much time to do more or train extra. The focus will be to end the season on a positive note without any injury. It’s been a great year for me. I have gone past 89 metres thrice out of five competitions, 88.3m in World Championships, and 86.69m in Kuortane Games despite the challenging weather,” Neeraj said.

“So, the performance has been consistent and now the focus is on doing well in Zurich.”

Neeraj picked up a groin injury during a silver-medal win in the World Championships last month. The injury forced him to skip the Birmingham Commonwealth Games.

The 24-year-old athlete feared his season was over after the injury but he recovered quickly thanks to the onemonth rehabilitation at Saarbrucken in Germany.

“I had to skip CWG due to the groin injury and I felt that I will have to end the season. But there wasn’t much pain so I had the belief that I will recover before the tournament (Lausanne meeting).

“I made some good throws in the training and was feeling well hence we made the decision to compete. I had very limited time to prepare but the proper planning helped me recover.”

The Lausanne feat also earned Neeraj a place in the 2023 World Championships in Budapest. The qualification mark is 85.20m.

“It’s an advantage to qualify for World Championships much in advance as there are other tournaments like Asian Games lined up next year.”