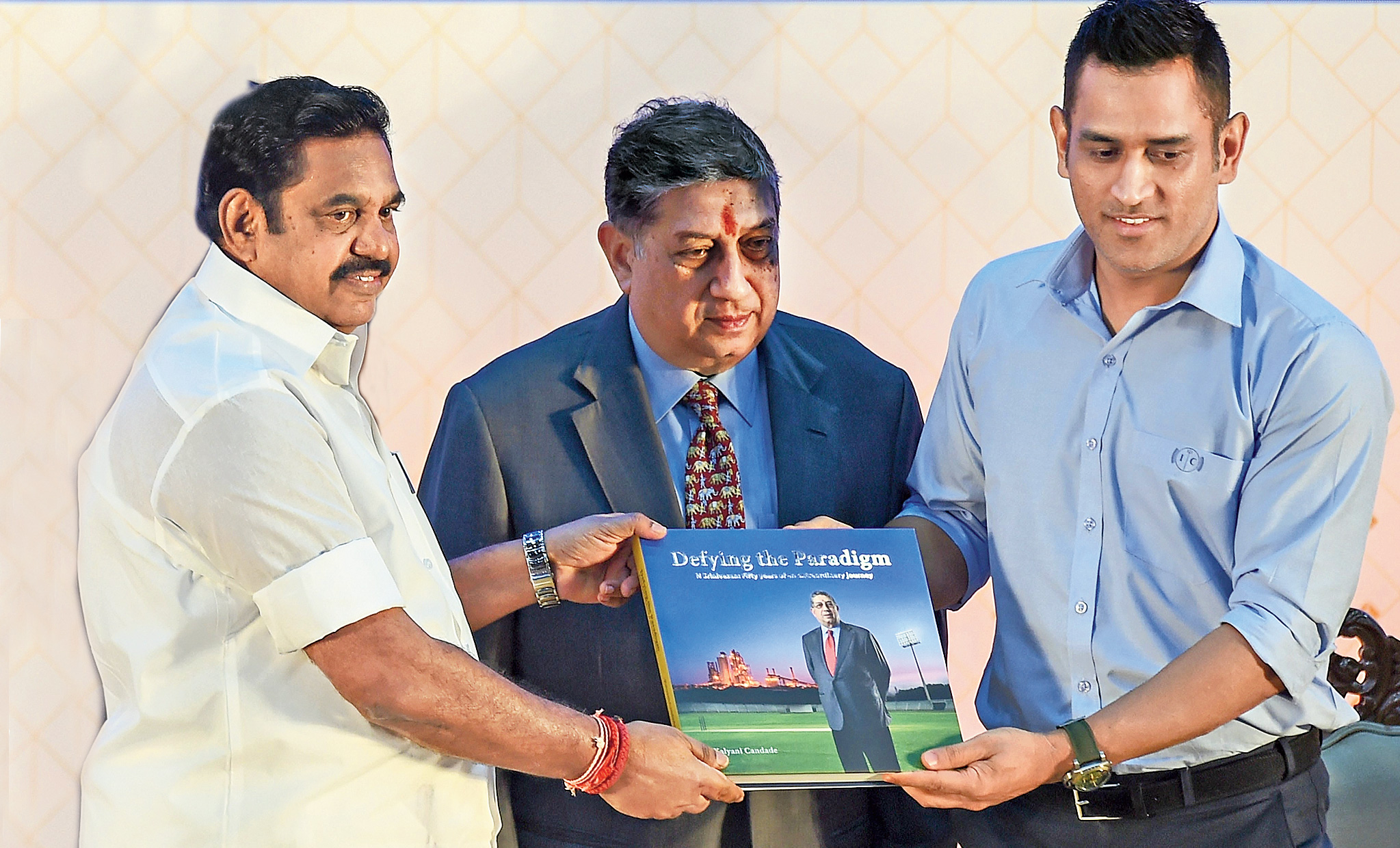 Narayanswami Srinivasan pulled off what very few could have: Getting together Tamil Nadu chief minister Edappadi K. Palaniswami and the leader of the Opposition, M.K. Stalin, under one roof for a private function. In fact, no more than around 20 feet separated the rivals at the Kalaivanar Arangam.

The occasion was the release of Defying The Paradigm, a coffee-table book on India Cements Ltd and Srinivasan himself, on Friday evening. He is the infrastructure major’s vice-chairman and managing director.

A host of former India captains, plus the Javagal Srinaths and Yuvraj Singhs, Board of Control for Cricket in India treasurer Anirudh Chaudhry, his father (former Board president) Ranbir Singh Mahendra, other administrators and most members of the Chennai Super Kings team were present. Old hand Prof. Ratnakar Shetty, now retired from the Board, too.

The turnout was mightily impressive.

From Sunil Gavaskar to Kapil Dev and from Rahul Dravid to Chennai’s favourite non-Tamilian son, Mahendra Singh Dhoni, all had the most kind words only for Srinivasan.

Srinivasan is a former chairman of the International Cricket Council and a former president of the Board. For quite some time, his word had actually been law.

Asked by The Telegraph if the greats had judged him more kindly than many in some other walks of life, Srinivasan replied: “I wouldn’t put it as more kindly... I’d say the honoured speakers judged me correctly. That’s the bottom line.”

Srinivasan, now 73, couldn’t have made his point any better.

Be it Kapil or Dravid or Dhoni, all highlighted the “caring” side of Srinivasan and that was on view at the function as well: Gavaskar, V.V.S. Laxman, Harbhajan Singh and Ashish Nehra were booked on a chartered flight from Mumbai.

Gavaskar had a family function to attend and, so, he flew back on the same aircraft after 15-20 minutes. Late at night, the other three were to make their return journey (owing to TV commitments early on Saturday) in the same way.

Well, an invitation from Srinivasan doesn’t get disregarded.

Dravid and Dhoni spoke of the deep personal bond they share with Srinivasan and India Cements. Both are employed by the company.

While Dravid, the India A and U-19 coach, thanked Srinivasan for the “little things” he continues to do, Dhoni mentioned the “family-like” environment.

Later, Srinivasan revealed that his “only instructions” on the day of the first IPL auction, back in early 2008, was for Chennai Super Kings to get Dhoni “at any cost.”

“It came down to mathematics and I’d worked that out... The Mumbai Indians pulled out of the bidding for Dhoni,” Srinivasan recalled.

Barring the two years that the Super Kings were banned from the IPL, Dhoni has been a constant at the franchise.

Besides cricketers, Srinivasan received accolades in plenty (“mentor to India’s cement, not only India Cements”) from Mahendra Singhi, who heads the national Cement Manufacturers Association.

As for Palaniswami and Stalin, the latter left the venue with his entourage before the chief minister was to give his address.

Stalin too couldn’t have made his point in a more telling manner.

Palaniswami, however, did refer to the “leader of the Opposition” in his speech. As did Srinivasan, who also probably missed Stalin leaving.

The first copy of the book, which captures the 70-year journey of India Cements and 50 years of Srinivasan’s association with it (and his dominant innings in cricket) was presented to Dhoni by Palaniswami, who spent more than an hour at the function. Stalin was there for close to an hour.

Incidentally, India Cements’ ties with cricket go back to 1965 and the Jolly Rovers team. As for Srinivasan’s first shot at cricket administration, it was in 1995. He lost in the Tamil Nadu Cricket Association elections that year, but the defeat only made him more determined.

The rest has been extensively documented.