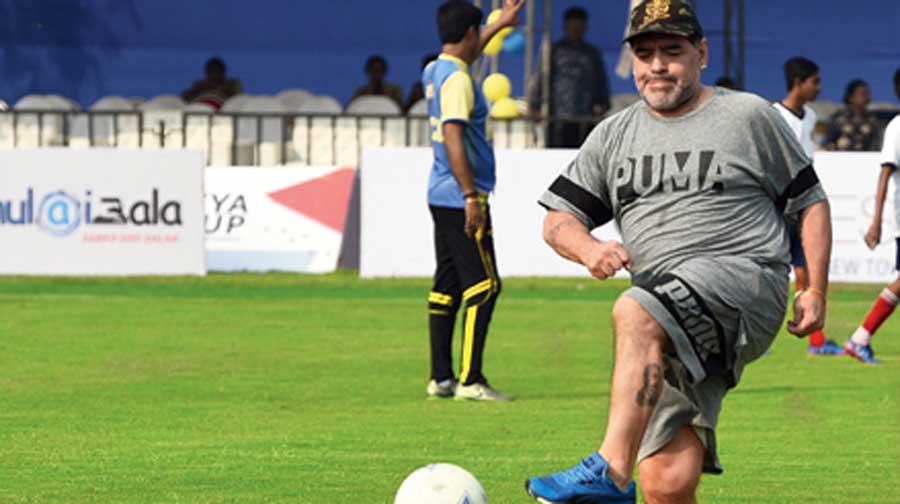 Tens of thousands of fans, many weeping, filed past the coffin of Diego Maradona in ceremonies which, like the soccer superstar’s life story that swayed between extremes, mixed head-of-state-like honours with the chaos of a packed stadium.

Viewing was halted shortly before 6pm on Thursday (2.30am IST on Friday) as the family wished and the body of the Argentine icon was taken away for burial, frustrating many waiting fans.

About two dozen people gathered at Jardín Bella Vista cemetery for a private religious ceremony and the burial. Maradona, who died on Wednesday of a heart attack, was being buried next to his parents, Dalma and Diego.

Fans singing soccer anthems, some draped in the national flag, formed a line that stretched more than 20 blocks from the Plaza de Mayo, where Argentines gathered to celebrate the Maradona-led triumph in the 1986 World Cup. But the crowd overwhelmed organisers, prompting clashes and arrests.

The first to bid farewell were his daughters and close family members. His former wife, Claudia Villafañe, came with Maradona’s daughters Dalma and Gianinna. Later came Verónica Ojeda, also an ex-wife, with their son, Dieguito Fernando. Jana Maradona, who the player recognised as his daughter only a few years ago, also attended. Then came former teammates of the 1986 World Cup-winning squad, including Oscar Ruggeri. Other Argentine footballers, such as Boca Juniors’ Carlos Tévez, showed up, too.

President Alberto Fernández placed on the casket a jersey from the Argentinos Juniors team, where Maradona started his career in 1976. In tears, Fernández also laid two handkerchiefs of the human rights organisation Mother of the Plaza de Mayo, or Madres, who wore them for years to protest the disappearance of their children under Argentina’s military dictatorship between 1976 and 1983.

Maradona was a friend of the Madres and other rights groups.