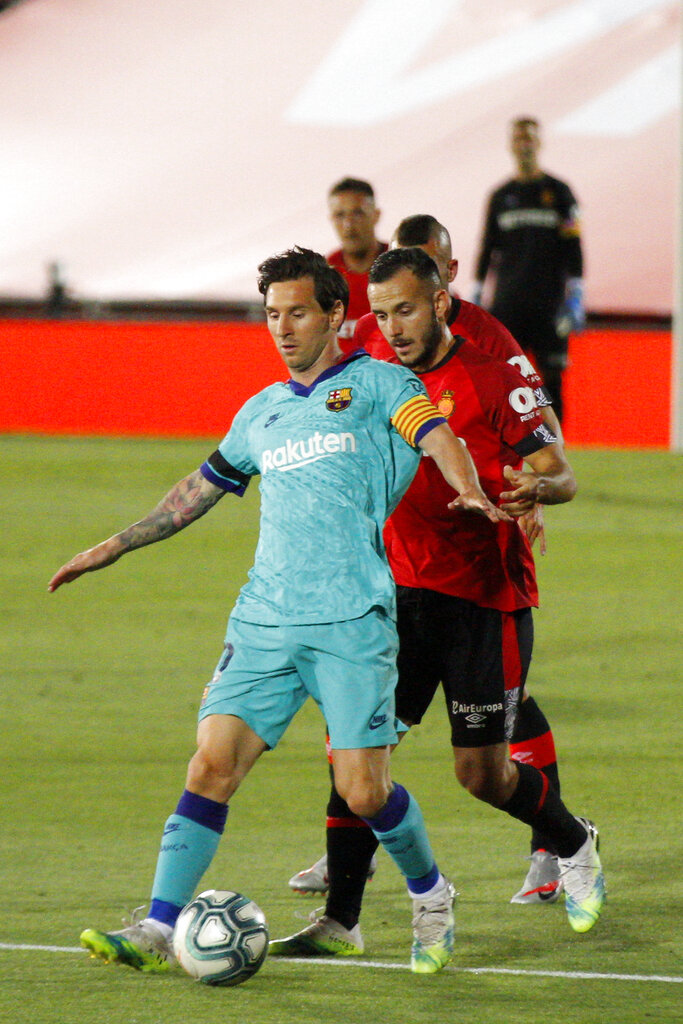 Barcelona's Lionel Messi vies for the ball with Mallorca's Joan Sastre during the La Liga match between Mallorca and FC Barcelona
(AP)
Agencies   |   Madrid   |   Published 15.06.20, 01:46 AM

Lionel Messi scored one and set up two more goals as Barcelona picked up where they left off before a three-month stoppage for the Covid-19 pandemic, beating Mallorca 4-0 to extend their Spanish league lead.

Messi was as quick and dominant as ever despite not having played a match since early March. He showed no signs of being slowed down by the right leg muscle pain he suffered last week that put his return in doubt. He darted past defenders with ease.

Messi and the other starters also behaved and played as normal on the pitch, hugging after first-half goals by Arturo Vidal and Martin Braithwaite and not maintaining social-distance recommendations during cooling breaks.

The game was played without spectators as part of the league’s health protocols to limit contagion risks, but that did not stop one fan from invading the pitch briefly in the second half.

He was escorted off by security after he managed to take a selfie a few metres in front of Barcelona’s Jordi Alba, Messi nodded on a ball for Braithwaite to get his first goal since joining Barcelona midseason and double the second-minute opener by Vidal.

The Argentine forward assisted Alba before he scored on his own in stoppage time. Once Messi probed the relegation-threatened Mallorca for their weaknesses, he began taking opponents on.

Messi dribbled past four defenders in one run down the middle of the pitch in search of another goal, before half-time gave the hosts a breather.

“The sensations are good, to be the first match after so long not playing and under these special circumstances,” Barcelona coach Quique Setién said.

“You could have expected a slower pace and a bit of rust as far as handling the ball, but I think we have made a good start to this final sprint of 10 games to finish the season.

“Braithwaite was excellent, he has adapted very well to our play out on the left wing and was always doing the right thing,” Setien said.

Luis Suárez, who benefited from the long league stoppage to recover from right knee surgery, was with the rest of Barcelona’s reserves, wearing face masks and sitting in the stands with several empty seats separating them.

The Uruguay striker went on for his first action since January as one of five allowed substitutes. Suárez laid off for Messi to speed around two defenders and fire in his right-footed shot into the top corner to complete the commanding victory with his league-leading 20th goal.

The Spanish league said on Sunday it will file criminal charges against the fan who ran onto the field during the match.

Saturday’s match was played without fans but the youngster wearing an Argentina soccer jersey made it past security and took a photo of himself a few metres in front of Barcelona defender Jordi Alba.

Atletico Madrid drew 1-1 at Athletic Bilbao on Sunday missing out on the chance to capitalise on slip-ups by their rivals for Champions League places.

Iker Muniain gave Athletic the lead in an empty San Mames stadium by prodding home in the 37th minute to complete a clever move but Atletico responded two minutes later when Diego Costa slotted in following a through ball from Koke.