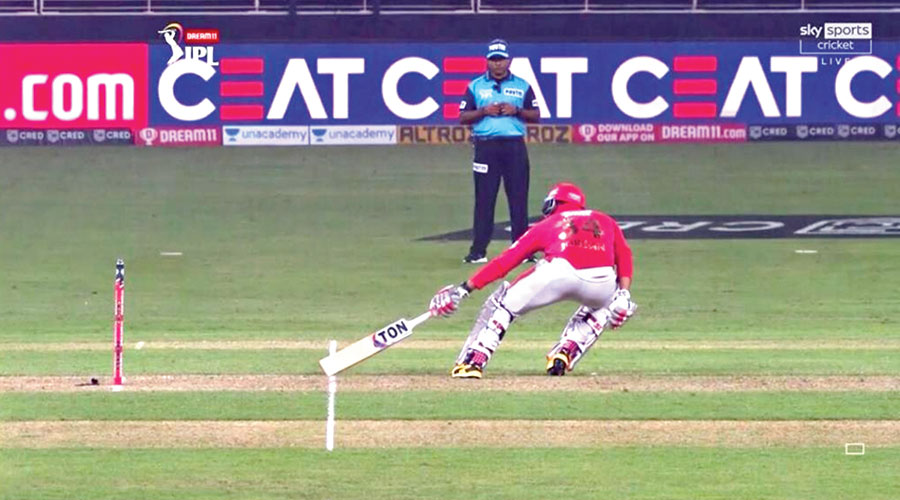 Kings XI Punjab have filed an appeal with Match Referee Javagal Srinath over umpire Nitin Menon’s “incorrect” line judgement that resulted in a “short run” call during a crucial phase of their match against Delhi Capitals in Dubai on Sunday.

KXIP lost in the Super Over after the match was tied at the end of 20 overs. The incident happened in the 19th over when Menon — who was stationed at square leg and has recently been included in the ICC Elite panel — ruled KXIP’s Chris Jordan to be one run short though TV replays showed that his bat was well within the crease when he completed the first run.

“We have appealed to the Match Referee saying that such an incident has taken place. You can also say we have informed him of it since nothing much can be done once the match ends.

“I understand this is a human error but it could cost us a playoff berth. This is unfair and we can only hope that the BCCI takes appropriate measures to avoid such things in future,” CEO Satish Menon told The Telegraph on Monday.

KXIP co-owner Ness Wadia was scathing in his assessment.“It is unfortunate that Kings XI were the subject of poor decision making by the umpire and this cost us the game. I do hope that BCCI implements a system and process so that the other teams do not suffer the same plight as Kings XI did...

“If technology is not there to be used for the fairness and transparency of the game and to ensure that it is equitable to all, then why use technology at all,” Wadia said.

According to the rules, the third umpire’s opinion can be sought for a possible dismissal or an unclear boundary. Front foot no-ball calls are also being monitored by the third umpire from this year.

However, there are doubts whether technology can always be considered fool-proof. “The cameras monitoring line calls often show varying results from different angles and cannot be considered conclusive. All these things have to be taken into account before a decision is taken,” said someone in the know of things.

Another co-owner and actress Preity Zinta tweeted: “I travelled enthusiastically during a pandemic,did 6 days of Quarantine & 5covid tests with a smile but that one Short Run hit me hard. What’s the point of technology if it cannot be used? It’s time @BCCI introduces new rules.This cannot happen every year.”

Asked how he manages to pull off the Super Overs, Rabada said: “It just depends what works for me on the day. There’s decent bounce in this wicket, and the boundaries are quite big. It’ll take a bit to clear it.” PTI