Advertisement
Home / Sports / IPL: Kartik Tyagi turns it around as Punjab Kings fall in last over

IPL: Kartik Tyagi turns it around as Punjab Kings fall in last over 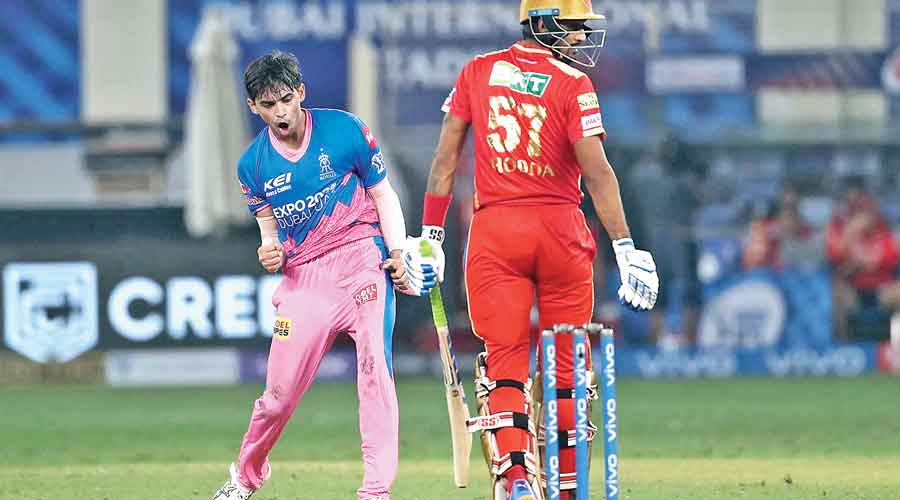 Kartik Tyagi celebrates the wicket of Deepak Hooda in the final over of the match in Dubai.
Picture courtesy IPL
Sayak Banerjee   |   Calcutta   |   Published 22.09.21, 01:43 AM

Four required off the final over, eight wickets in hand with two set batsmen at the crease. Yet, Punjab Kings lost the game. What should have been a cakewalk for Punjab Kings turned out to be a horror tale with Rajasthan Royals sneaking home by two runs.

Punjab Kings’ tendency of making a mess of run chases towards the end was witnessed on more than one occasion in the previous IPL too. But against Rajasthan Royals at the Dubai International Stadium on Tuesday, their tendency to choke seemed to have attained a different level altogether as they shocked almost everyone with an inept display. Something that the Royals themselves may not have even imagined when they had little to defend in the final over of the game.

Credit, however, also goes to Kartik Tyagi (2/29), who bowled that game-changer of a final over, conceding only one run with five dot balls, including a couple of wickets in the form of Nicholas Pooran and Deepak Hooda. It appears that accompanying Team India cricketers as a standby during their Australia tour last season has helped Tyagi immensely. His fearlessness stood out when he unleashed those yorkers and also followed it up by pitching it a shade wide of the off stump.

With three needed off the last ball, he bowled a yorker that was almost Jasprit Bumrah-like. It turned out to be a dot ball as well as the Royals restricted Punjab Kings to 183/4 after being all out for 185. The win takes the Royals to No.5 in the table with eight points, while Punjab slip to second from bottom.

Earlier, dropping rival skipper KL Rahul thrice had cost the Royals dearly as he and opening partner Mayank Agarwal plundered 120 within the first 12 overs of the run chase that laid the foundation for their side.

Earlier, young Arshdeep Singh (5/32) and senior pro Mohammed Shami (3/21) were instrumental in restricting the Royals to below 200. Arshdeep came on to bowl when Royals opener Evin Lewis, riding on his rich form for champions St Kitts & Nevis Patriots in the Caribbean Premier League, was carting the Punjab attack to all corners.

After dismissing the left-hander with a slower one, Arshdeep cramped the impressive Mahipal Lomror (43) up for room in the 18th over and then struck twice in the final over of Punjab’s innings to

cap off what was an excellent piece of death bowling. In the end, he has only his teammates to blame for being deprived of a deserving Man-of-the-Match award.

Left-arm spinner Harpreet Brar too did a decent job, keeping it tight in his three overs.

Warming the Punjab reserve bench throughout IPL 2020 and the first half of this edition, Ishan Porel finally had a taste of an IPL game. The Bengal quick’s start wasn’t good as Lewis took him apart, but he came back well to remove Sanju Samson and also didn’t concede too many off his last two overs.