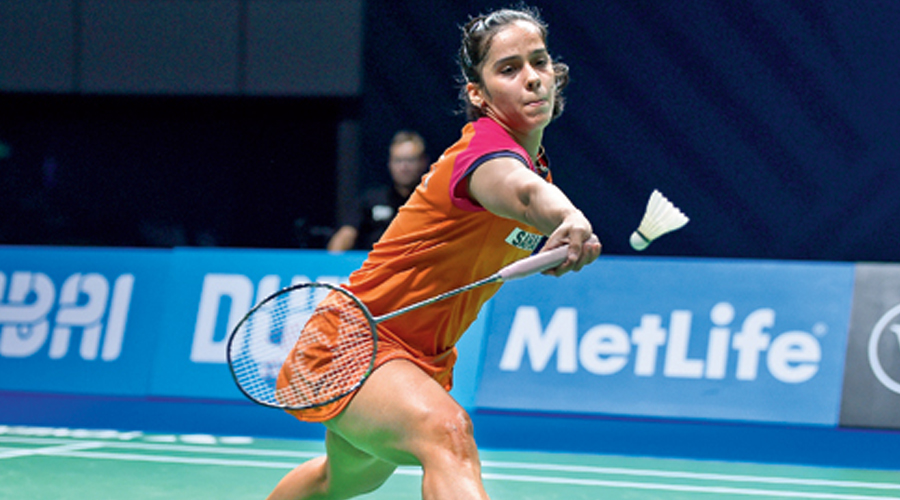 Former world no.1 Saina Nehwal will miss the World Championships for the first time in her international career due to multiple injuries that have derailed her season.

The London Olympics bronze-medallist, who has won a silver and bronze besides eight quarterfinal finishes in the World Championships over the years, is recovering from a groin pull and knee injury.

The big event will be held in Huelva, Spain from December 12 to 19.

"Saina had to withdraw from World Championship as she is still recovering from the groin and a knee injury. She won't be able to regain fitness in time to play the tournament," Saina's husband and fellow shuttler Kashyap told PTI.

Returning to action at the Thomas and Uber Cup Final in Aarhus, Denmark in October, Saina had to retire midway in the round-robin match against Spain's Clara Azurmendi due to a groin niggle.

She played in Denmark but again withdrew midway into the second game of the first-round match at French Open.

"She had a tough groin injury in Uber Cup. She was fine in Denmark but it didn't heal properly and again started paining when she was playing in French Open. It aggravated and became serious," said Kashyap.

"She also had a knee injury in France and had to pull out. She is doing her rehabilitation now. Hopefully, she will be able to get back to training from 10th or 15th of this month."

In a stellar career, Saina has never missed the World Championships since making her debut in the 2006 edition.

The 31-year-old from Hyderabad claimed the silver in 2015 when her rampaging run was stopped by Spain's Carolina Marin in the final. She also secured a bronze two years later at Glasgow, Scotland.

In 2018, Saina claimed her second individual gold medal at the Commonwealth Games and also helped the country win its first mixed team title in the quadrennial event.

However, she has been ravaged by injuries for most of the last two years and missed the Tokyo Olympic qualification this year.

Following a series of early exits, Saina's ranking has also slumped to world no.23.

"She is naturally a bit upset, especially since it has been tough two years for her, she has been getting injured too often, there were niggles, stomach issues, I mean, something or other has been happening," Kashyap said.

"But it is a phase and she has to work around it. She can play for 2-3 years, I feel. She is a positive person and she will figure things out."

Kashyap, himself, has endured a tough time in the international circuit with early ousters from the last few events.

He slipped during training at Denmark and had to retire midway from his match the next day.

Now back to full fitness, Kashyap is eyeing a good outing in the two All India senior ranking tournaments at Chennai and Hyderabad, which will restart the domestic season in the country.

"I am fit now and am looking forward to play well at the two ranking events this month," he said.