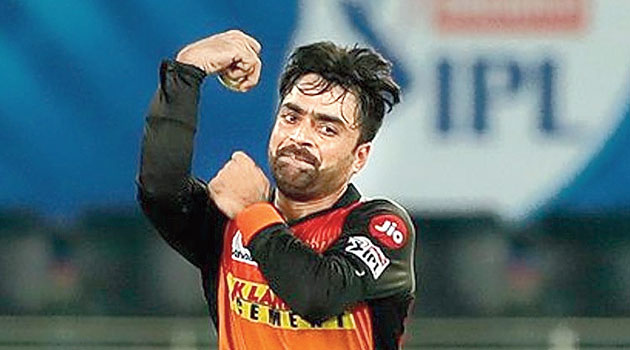 Rashid Khan believes Sunrisers Hyderabad’s total of 201/6 helped them record their third win and jump to third position in the standings.

“That’s what happens when you have a good total on the board. The batsmen have to go after you. But you also have to bowl your best deliveries and that’s what I was trying to do,” the Afghanistan spinner, who finished with three for 12 in his four overs, said.

“Losing Mitch Marsh and Bhuvi was a big blow but the youngsters are taking the responsibility. We have the best bowling combination in the last 4-5 years,” Rashid said.

“We had a simple plan today... we had defended 160 on this ground, we thought 180-185 would be a good score on this wicket and anything over that we were happy.”

The Sunrisers wore black armbands in memory of Afghan player Najeeb Tarakai, who died recently. “He was a good friend, and we lost him two days ago in an accident, it is shocking,” Rashid said.

Sunrisers captain David Warner praised Rashid’s effort. “He’s a world-class bowler, it’s great to have him. He always delivers in pressure situations. He loves that stuff. What a player,” Warner said.

He also lauded Jonny Bairstow’s 97 off 55 balls. Warner and Bairstow put on 160 runs in an opening stand.

Bairstow felt the opening partnership made the difference. “Very pleased with the effort. Consistency is the key. The partnership at the top was the key tonight. Batting with Warner is always good fun,” Bairstow said.