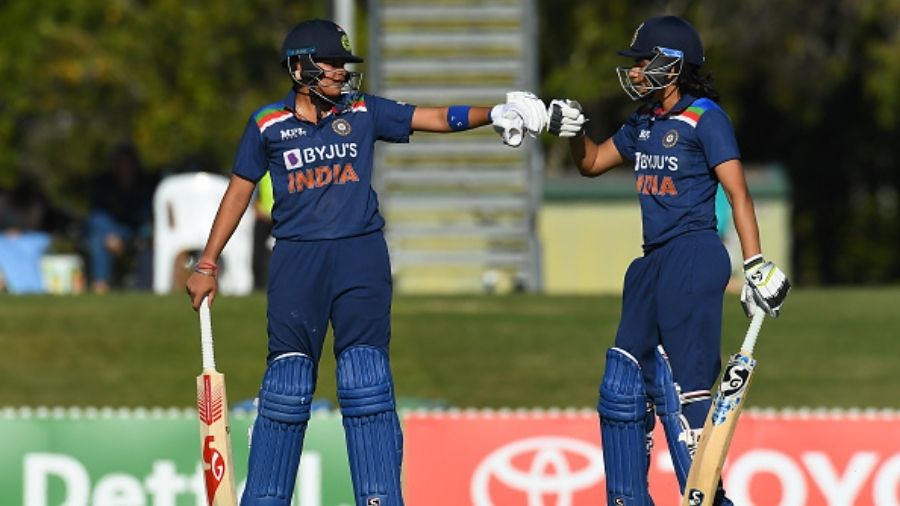 Women in blue gained some lost ground ahead of the upcoming day/night Test, after conceding the three-match series in their previous outing.
Twitter/ @BCCI
Our Bureau, PTI   |   Mackay   |   Published 26.09.21, 02:58 PM

India's young batters Yastika Bhatia and Shafali Verma dazzled at the top with contrasting half-centuries to power their team to a consolation two-wicket victory over Australia in the third women's ODI, which ended the home team's 26-match unbeaten streak here on Sunday.

The visitors completed a tricky chase of 265 -- their highest-ever -- in the last over, gaining some lost ground ahead of the upcoming day/night Test, after conceding the three-match series in their previous outing.

Chasing a challenging target, India got the start they needed, thanks to a 59-run stand for the opening wicket between Verma (56) and Smriti Mandhana (22) in just under 11 overs.

Coming off an excellent half-century some time ago, Ashleigh Gardner broke the partnership when she had Mandhana caught by Annabel Sutherland.

Bhatia (64) joined Verma in the middle and the two forged a fine partnership and carried on the good work without any difficulty.

After 25 overs, India were comfortably placed at 131 for one with the visiting batters hitting a boundary every over.

Known for her free-flowing game, the 17-year-old Verma seemed to have made a conscious decision to bat deep but battling what appeared to be back pain and exhaustion, the teenager from Rohtak gave in after reaching her maiden half-century in the format off 86 balls, ending a fruitful 101-run association with Bhatia.

Playing in only her third ODI, Bhatia, 21, was the aggressor in the chase and brought up his first half-century in 56 balls.

Bhatia added 14 more runs to her total before substitute fielder Molly Strano changed the complexion of the game with a spectacular catch in the boundary.

The Indian batter also got a reprieve just before reaching her fifty, but she could not fully capitalise on it.

It was a big blow for India who were pegged back after that dismissal, suddenly finding scoring difficult after doing so with elan in the first half of their innings.

Richa Ghosh fell for a duck to Sutherland before the medium pacer went through the gap between Pooja Vastrakar's bat and pads to leave India in a spot of bother at 192 for five.

Skipper Mithali Raj broke the shackles with a welcome maximum off Stella Campbell after only six runs came off 20 balls, but the veteran too succumbed to the pressure created by the increasing asking rate as she was bowled by Sutherland when she tried playing an uncharacteristic shot.

However, Sneh Rana (30) and Deepti Sharma (31) quickly added 33 crucial runs down the order, enough for the ones who followed them to see the team through.

Earlier, Indian bowlers again let Australia off the hook as the home team recovered from a wobble to post a competitive 264 for nine.

Struggling at 87 for four in the 25th over, the hosts recovered through a 98-run stand between Ashleigh Gardner (67) and last-match centurion Beth Mooney (52).

Tahlia McGrath chipped in with a brisk 47 off 32 balls.

Opting to bat first after winning the toss at the Harrup Park, Australia were off to a sedate start with the returning Rachael Haynes (13) and Alyssa Healy (35) putting on 41 runs for the first wicket in 8.1 overs.

Coming off a heartbreaking loss in the second ODI, Goswami provided the opening breakthrough when she had Haynes caught at mid-off while the batter tried to play one over the top.

India rejoiced again four balls later as a beautiful Goswami delivery lured skipper Meg Lanning to go for a drive only to nick it to wicketkeeper Richa Ghosh.