Axar Patel’s clever bowling, coupled with timid and clueless English batsmen, helped the hosts bundle out the visitors for a paltry 112 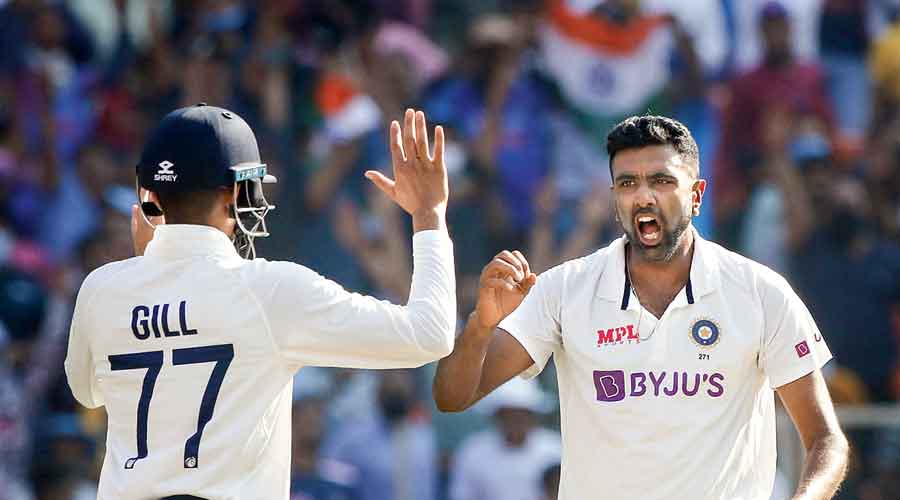 Not quite in the pink of health still, but India ended Day 1 of the third Test in Ahmedabad in a better position than England.

Courtesy Axar Patel’s clever bowling, and helped by timid and clueless English batsmen, the hosts bundled out the visitors for a paltry 112. This, after Joe Root won the toss and opted to bat in the pink-ball Day-Night Test at the refurbished Motera stadium, renamed after Prime Minister Narendra Modi.

In reply, India reached 99 for three at stumps with Rohit Sharma and Ajinkya Rahane at the crease.

Shubman Gill and Cheteshwar Pujara perished in quick succession, but Rohit, continuing with his superlative form, and captain Virat Kohli looked well in control during their 64-run stand. Jofra Archer and Ben Stokes often pitched it too short, much to the liking of Rohit and Kohli as they feasted on them.

They were tight in defence even though the odd ball did pose a few problems, especially those from Jack Leach.

This reflects England may have erred in terms of selection, too. Dom Bess could well have been handy on this surface, which isn’t a belter by any means. Besides, Leach asked questions bowling from the same end as the gangly Axar did earlier on.

But overall, India dominated the opening day from first to almost last, until the late wicket of Kohli silenced the 40,000-strong crowd for the first time.

Having been given a reprieve by Ollie Pope off James Anderson — who hasn’t dismissed Kohli since 2014 — in the gully moments before, the skipper aimed a cut off Leach in the final over of the day and chopped the ball on to his stumps.

Kohli could not believe what he had done; it was the 11th wicket of the day to fall to spin, despite all the prognostications of how conditions would change under the LED lights. But England will have to ask themselves if the damage hasn’t already been done by their horror show with the bat.

On a pitch that spun a little, but by no means extravagantly, the English batsmen were rendered stroke-less by Axar and Ravichandran Ashwin, unsure which balls were turning and which were not. The majority of Axar’s scalps in fact came off the straighter ball, which England kept misreading right through.

Things, though, weren’t looking as terrible for England when Zak Crawley, returning from a wrist injury, and captain Root were at the crease. The duo may not have dominated during their 47-run stand, but they didn’t look to be in too much of discomfort either after Ishant Sharma, playing his 100th Test, accounted for Dom Sibley and Axar picked up Jonny Bairstow.

But after Ashwin trapped Root lbw off a ball which should have been dealt with going on the front foot, the rest of the England batting fell like a pack of cards as they lost seven wickets for just 38.

It can be said that the English batsmen also erred in not trying to read the ball from the bowlers’ hands and playing only after it was pitched.  In other words, completely unimaginative batting.

Washington Sundar, coming back into the XI (in Kuldeep Yadav’s place) didn’t have to bowl at all, which implies Axar and Ashwin had held England by the scruff of the neck throughout.

If Ashwin doesn’t get you, Axar will.