The 33-year-old claimed a fourth successive straight-sets victory in his latest quest for a second French Open title, but it was nowhere near as straightforward as the score suggests 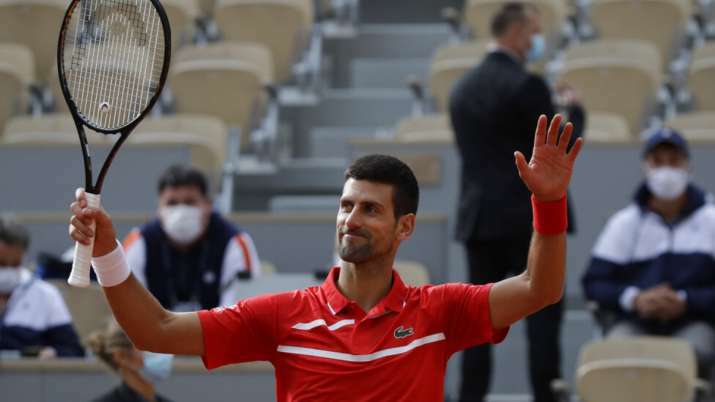 Top seed Novak Djokovic passed his first real test at this year’s French Open, as he battled past Russia’s Karen Khachanov 6-4, 6-3, 6-3 on Monday to reach the quarter finals for the 14th time.

The 33-year-old claimed a fourth successive straight-sets victory in his latest quest for a second French Open title, but it was nowhere near as straightforward as the score suggests.

Djokovic faced stiff resistance before taking the first set and had an anxious moment when his attempted return off one Khachanov serve ricocheted off his frame and struck a line judge in the head, reviving memories of his US Open debacle.

Djokovic appeared to be in cruise control when he led 2-0 in the third, but Khachanov took the next three games and had two break points for a 4-2 lead.

The Serb held though, and regained control to ease into his 47th Grand Slam quarter final.

Stefanos Tsitsipas reached the quarter finals of a Grand Slam for the second time, as he brushed aside Grigor Dimitrov 6-3, 7-6 (9-7), 6-2.

The Greek fifth seed was solid on serve throughout and played neatly as his Bulgarian opponent lost focus at crucial times under the roof of Court Philippe Chatrier.

On yet another chilly day in the French capital, seventh seed Kvitova’s superior firepower proved decisive as she posted her fourth successive straight-set victory.

With so many big names already out, twice Wimbledon champion Kvitova will sense a golden title opportunity as she heads into a quarter-final against unseeded German Laura Siegemund. “It was a great one today for sure,” said Kvitova, who returned to action at the 2017 French Open following a knife attack six months earlier that left her with career-threatening hand injuries.

“To be back on the same court that I made my comeback and to make the quarter final is something I didn’t expect. I’m trying to play faster here and play aggressive off the returns,” she told Eurosport.

The 30-year-old, whose best finish here was reaching the 2012 semi-finals, made her intentions clear from the start as she seized on anything short to dominate from the baseline, moving 4-0 ahead in 15 minutes on Court Philippe Chatrier.

Kvitova had to wait around in the cold as Zhang took a medical timeout at the end of the first set, but she turned up the heat to get an early break in the second set.

World No. 66 Siegemund, the oldest player left in the draw at 32, beat Spain’s Paula Badosa 7-5, 6-2 to reach her first Grand Slam quarter final.

Siegemund, pushed to three sets in her last two matches here, fought off a rather spirited comeback attempt from Badosa to close out victory in style.

American fourth seed Sofia Kenin recovered from a wobbly start to reach the quarter finals with a 2-6, 6-2, 6-1 victory against Fiona Ferro.