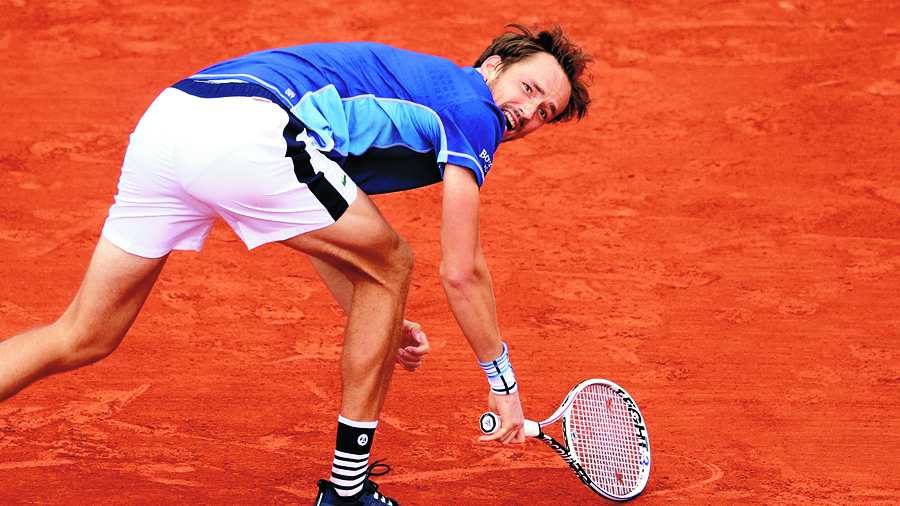 Daniil Medvedev still has issues with claycourt tennis, but the world No.2 cantered into the French Open third round with a 6-3, 6-4, 6-3 win against Serbian Laslo Djere on Thursday.

The Russian, who reached the quarter finals at Roland Garros last year after four consecutive first-round exits, struggled at times but his elasticity eventually made up for his lack of natural ability to move around on the slow surface.

Medvedev found himself down a break in the first set but his brilliant defence helped him claw his way back both times on court Philippe Chatrier. He will next meet 28th seed Miomir Kecmanovic of Serbia.

Medvedev’s win was enjoyed by the Roland Garros crowd, who have made him one of their favourites for his ability to speak almost fluent French — a talent he likes to play with.

Rafael Nadal produced an imperious show on Wednesday to secure his 300th grand slam match victory, dismantling local hope Corentin Moutet 6-3, 6-1, 6-4 to book his spot in the third round.

Nadal counts 13 Roland Garros titles among his overall 21 majors — the highest among men — and despite his injury-blighted build-up to the claycourt tournament, he has looked at his usual best in the first two rounds.

The Spaniard, who turns 36 next week, will next meet Dutch 26th seed Botic van de Zandschulp.

Iga Swiatek demolished American Alison Riske 6-0, 6-2 as she raced into the third round with her 30th consecutive victory. The world No.1 showed  no mercy as she went close to dishing out the first ‘double bagel’ of this year's tournament. The Polish player was virtually unchallenged by the world No. 43 who could only manage seven points in the opening set. Riske put up something of a fight in the second but Swiatek did not ease the pressure and wrapped it up in just over an hour.

French wildcard Leolia Jeanjean caused a major upset when she destroyed former world No.1 Karolina Pliskova 6-2, 6-2 in the second round.

The 26-year-old Jeanjean is a former big hope of French tennis who ended up living on minimum wage after a knee injury suffered when she was 15 kept her off the courts for two years. Dropped by Nike, who had given her a 10-year sponsorship deal Jeanjean went to study in the US. She came back to tennis after five years in the US. On Thursday, Jeanjean outfoxed eighth seed Pliskova.

India’s Rohan Bopanna and Sania Mirza notched up contrasting wins with their respective partners in the men’s and women’s doubles competitions. While Bopanna and Dutch Matwe Middelkoop marched into the pre-quarters with a 6-3, 6-4 win over Andrey Golubev and Fabrice Martin, Sania and Czech Republic’s Lucie Hradecka beat Italian duo of Jasmine Paolini and Martina Trevisan 4-6, 6-2, 6-1 in the opening round.