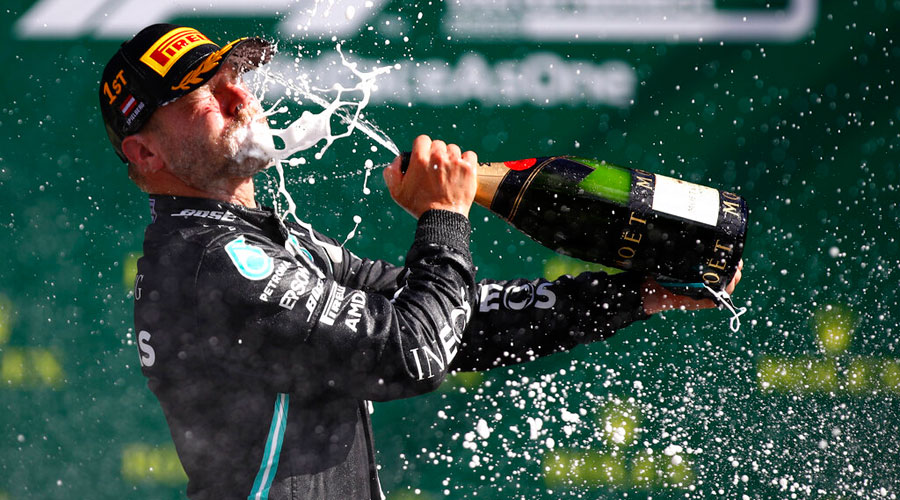 Valtteri Bottas of Mercedes celebrates after winning the season-opening Austrian GP in Spielberg on Sunday.
AP
Agencies   |   Spielberg   |   Published 06.07.20, 12:49 AM

Valtteri Bottas won an action-packed Austrian Grand Prix for champions Mercedes on Sunday as Formula One started its delayed season with plenty of drama, if no spectators, in a race with only 11 finishers.

“I managed to keep it together and control the race from my side and it's a good start to the season,” said Finn Bottas, who had to keep his cool through three safety car periods.

Norris, at 20 the youngest driver in the race and now the youngest Briton to stand on an F1 podium, also set the fastest lap. The race, on a sunny afternoon at the scenic Red Bull Ring was held in front of empty grandstands and no fans for the first time due to the Covid-19 pandemic.

There was drama even before the race when stewards performed a U-turn after a Red Bull challenge and dropped Hamilton from the front row to fifth on the grid for a breach in Saturday’s qualifying.

That also promoted Red Bull's Max Verstappen to the front row alongside Bottas on pole position. But any hope the Dutch youngster had of completing a hat-trick of Austrian wins, after 2018 and 2019, disappeared when he suffered an early technical problem and became the season's first retirement.

Earlier, Hamilton and a majority of the drivers took a knee on the starting grid. The sport’s only Black driver, an outspoken campaigner against racial injustice and for greater diversity, wore a black T-shirt with ‘Black Lives Matter’ on the front and ‘End Racism’ on the back.