He was called the James Bond of cricketers: tall, handsome, interested in events beyond the game 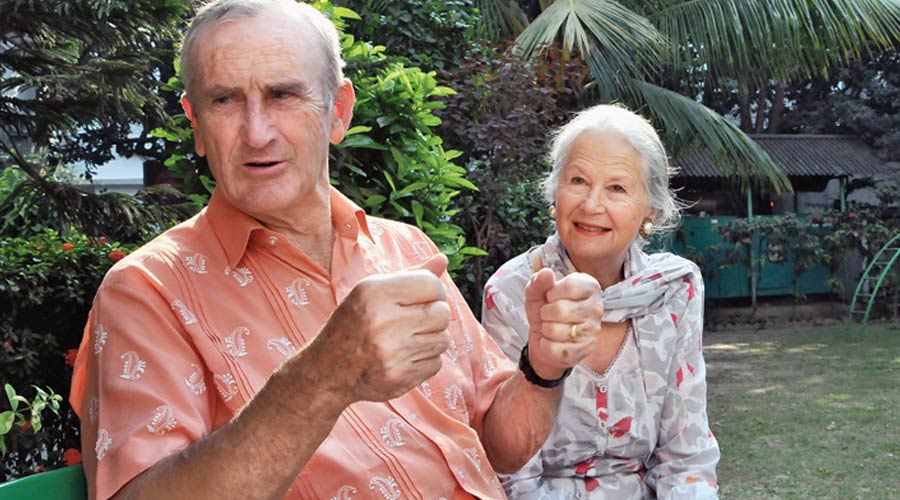 Former England captain Ted Dexter, who counted Calcutta — the birthplace of his wife Susan — among his favourite cities, has died aged 86 after a recent illness, Marylebone Cricket Club (MCC) said on Thursday.

Dexter, nicknamed “Lord Ted”, was an adventurous batsman and part-time seam bowler who played 62 Tests for England after making his debut in 1958 against New Zealand.

He captained England and Sussex in the early 1960s. He also became the first visiting England captain to lose a Test series in India, going down 2-0 to Nari Contractor’s side which had wins in Calcutta and Madras.

“After a recent illness, he passed away peacefully in the Compton Hospice in Wolverhampton at midday yesterday, surrounded by his family,” MCC said in a statement.

“Ted was a cherished husband, father and grandfather and one of England’s greatest ever cricketers. He was captain in 30 of his 62 Test matches and played the game with the same sense of adventure and fun that captures much of the story of his remarkable life.”

Dexter, who was born in Milan, Italy, where his father was a businessman, on May 15, 1935, was among the last of the privileged amateur class to captain England. He was educated at Radley and Cambridge (leaving before sitting his finals) before making his debut at home to New Zealand in 1958 aged 23. He ought to have been included in the original tour party for that winter’s Ashes tour but was eventually called up as an emergency replacement, though not before he had secured his engagement to the model Susan Longfield, “to deter predators”.

Calcutta-born Susan, whom he met at Cambridge, is the daughter of Tom Longfield, a senior executive with Andrew Yule who captained Bengal to its first Ranji Trophy title in 1938-39 and was thrice president of CC&FC.

Dexter scored two fifties in his only appearance at Eden Gardens but didn’t get to celebrate as England lost the Test by 187 runs in the winter of 1961-62. But he did celebrate another fifty in the city.

“Our 50th anniversary is on May 2 (2009) and Susan wanted to begin commemorating our time together with a holiday in the city where she was born and spent the first eight years of her life,” Dexter had told The Telegraph in December 2008, during a visit to the city.

“Me and my family have had some wonderful times here over the years. The fact that Susan’s father Tom Longfield captained Bengal in the Ranji Trophy makes this association even stronger.... I flew a six-seater Piper-Aztec from England to Calcutta en route to Australia with my family in 1970,” Dexter had recalled.

As a cricket administrator Dexter became chairman of the England selectors between 1989 and 1993.

His adventurous life and exciting experiences made Dexter a boys’ own cricketer.

He was a pioneer of one-day cricket, winning with Sussex the first two Gillette Cup knockout competitions and directly helping in the creation of the 40-overs Sunday league through his encouragement of ground-breaking International Cavaliers matches, also played on Sundays and with the involvement of overseas players at a time when both were considered too racy for the staid English county game.

He also developed a Test player ranking system that was formally adopted by the International Cricket Council (ICC) in 2003 and forms the basis of the governing body’s current Test rankings.

As captain, he was a great theorist — England pace great Fred Trueman once said ‘Dexter had more theories than Charles Darwin’. Dexter was never one for the dull grind, or the tedious draw. As a batsman, he wanted to take the bowlers on; as captain, he was interested in moving the game along. Famously, he did so at Lord’s against Wes Hall and Charlie Griffth in 1963, when he walked to the wicket after the early loss of John Edrich and proceeded to take on the fearsome fast bowlers — no helmets of course — scoring 70 in almost even time, standing tall and thrashing the bowlers around in a match remembered for that innings, and for Colin Cowdrey’s resistance at the end with a broken arm.

He was also called the James Bond of cricketers: tall, handsome, interested in events beyond the game. He stood for parliament in the 1964 election against future Prime Minister James Callaghan, and lost; loved to gamble on the horses and the dogs and was a fine golfer. He even authored a crime novel called Testkill.

In 1961, the French master photographer, Henri Cartier-Bresson, asked Dexter to be the subject of a pictorial essay about the life of a cricketer. Cartier-Bresson spent a few days at Hove, snapping images around the dressing room and nets, evocative of cricket and of the sporting life generally.

Dexter was later appointed president of MCC and was awarded a CBE in 2001.

As chairman of selectors, Dexter had his share of controversies when he put forth his dog-ate-my homework theories after England’s 3-0 rout in India by Mohammed Azharuddin’s team back in 1992-93.

The series was an omni-fiasco, in which the disastrous show was attributed by Dexter to smog, prawns, facial hair, train journeys, an Indian Airlines strike, Uzbek pilots, break-up of captain Graham Gooch’s marriage and, occasionally, England’s inability to bowl or play spin.

Mike Atherton, whom Dexter had picked as captain when he was chairman of selectors, hoped the current side would do Dexter proud.

“Hope England’s batsmen can put on a show today and that they play with the kind of grace and style and flair that Ted Dexter epitomised,” he said.