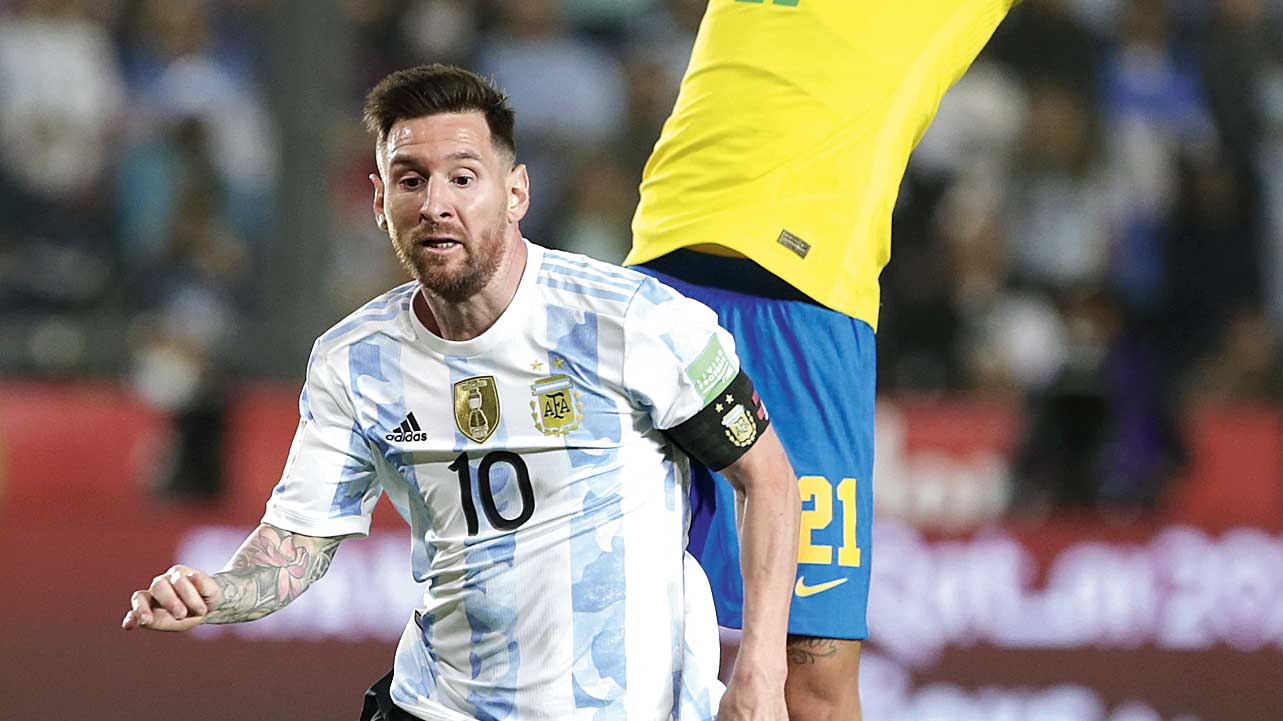 Argentina drew 0-0 at home with Brazil in a tense and end-to-end game on Tuesday, but results elsewhere meant the point they earned was enough to secure them a place in next year’s World Cup in Qatar.

The top four teams qualify automatically, and the fifth-placed side go into an inter-regional playoff. Even the Argentine players did not know they had qualified until well after the match in San Juan.

It was only after Ecuador, Peru and Bolivia recorded wins later in the evening that the Argentines were mathematically assured of their place in Qatar.

The good news came after an entertaining and hard fought game in western Argentina. Neither side was able to impose themselves in an even game with Fred’s second-half shot for Brazil that clipped the top of the bar the closest either team came to breaking the deadlock.

The last time Brazil and Argentina played a match, the action lasted just five minutes. The game in Sao Paulo was cut short by officials who invaded the pitch and stopped the game, accusing the Argentine players of not following the proper Covid-19 quarantine rules.

The match this time was hotly anticipated and while it lacked goals, it did not lack action. Alongside Vinicius Jr and Raphinha up front, Brazil started with Matheus Cunha in place of Neymar, their top goalscorer who did not travel to Argentina amid concerns about a thigh injury.

Vinicius Jr only had the goalkeeper to beat after 17 minutes but his attempted chip went wide and Cunha’s ambitious lob from his own half flew over just moments later.

At the other end, Alisson got down to save well from Rodrigo De Paul five minutes before half-time.

The game opened up even further in the second half with Fred and Vinicius Jr coming close for Brazil. But the game was still there for the taking and inevitably Lionel Messi was involved before the 90 minutes were up.

Messi was back to full fitness to start his first game since October but the Paris Saint-Germain striker was quiet until the final seconds of the match when he forced Alisson to get down to save a rasping shot from 20 meters.

“I gave it all I could,” Messi said. “This was a very intense game...It’s been a while since I’ve been out (injured) and it’s not easy to play in a game that demands this kind of pace.”

In La Paz, Bolivia scored twice in the first half then missed a penalty and had a man sent off in a 3-0 win over Uruguay, as they joined Peru and Ecuador in recording wins that boosted their chances of qualifying.

Uruguay’s defeat marked the first time they had lost four qualifiers in a row and further tightens the South American race for a place in next year’s finals. Pervis Estupinan scored the opening goal after nine minutes and Chile, who had Arturo Vidal sent off with just a quarter of an hour gone, conceded a second to Moises Caicedo in second-half stoppage time.

Colombia drew 0-0 at home to Paraguay, their fourth 0-0 draw in their last five games and their fifth in a row without scoring. Peru also boosted their chances of qualifying with a 2-1 win away in Venezuela.

Gianluca Lapadula put the visitors in front with a header after 18 minutes, only for Darwin Machis to equalise seven minutes into the second half.