Advertisement
Home / Sports / Football / Qatar World Cup 2022: Portugal through to Round of 16 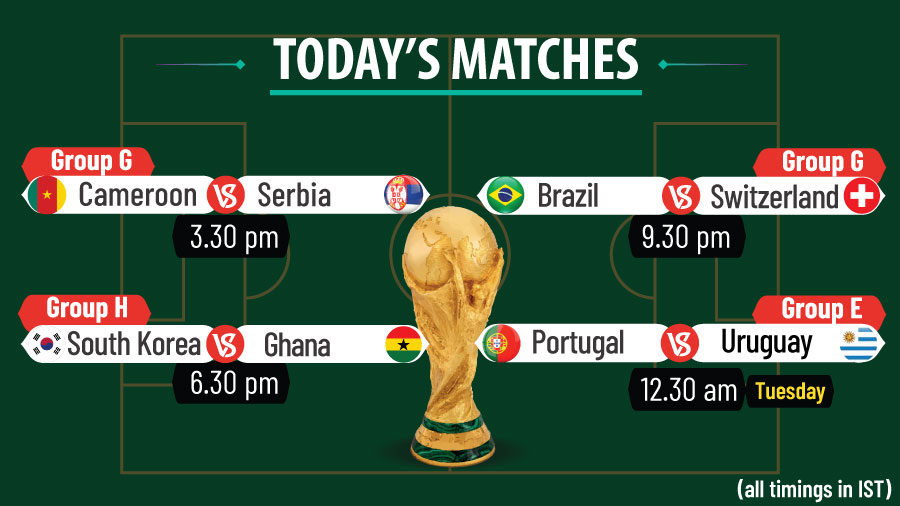 Bruno Fernandes scored a brace to ensure Portugal reach the Round of 16 by beating Uruguay 2-0 at the going Fifa World Cup in Qatar.

Brazil on Monday became the second team after France to reach the round of 16 courtesy of a 1-0 win over Switzerland. The only goal of the match came late in the second half when a volley by Casemiro took a deflection off a Switzerland player and went in.

Five-time champions Brazil dealt a massive blow going into its second Group G fixture as the Selecao have named a Neymar-less side for the crucial fixture against Switzerland.

Brazil’s pre-match news conference on Sunday was all about Neymar. Will he play at all further in the World Cup? Who could be his possible replacement?

Brazil take on Switzerland on Monday and Neymar and his swollen right ankle remain the topic of discussion. That memory of a 7-1 humiliation in Brazil eight years ago when Neymar was ruled out with an injury still haunts.

Mohammed Kudus scored twice to help Ghana beat South Korea 3-2 in a World Cup Group H thriller at a rocking Education City Stadium on Monday, keeping the Black Stars in contention for a place in the last 16.

Against the run of play, Ghana went ahead in the 24th minute when Mohammed Salisu struck from close range after South Korea failed to clear a free kick and Mohammed Kudus add a second with a glancing header to give the African side a 2-0 halftime lead.

Ghana had lost 3-2 to Portugal in their first match while South Korea held Uruguay to a 0-0 draw to earn a point.

South Korea is at the second spot in the Group H table with one point to their credit. On the other hand, Ghana is at the bottom spot.

South Korea were proud of their effort in the stalemate with Uruguay in their World Cup opener but would need to find the much-needed clinical edge when they face Ghana in Monday’s game, where both teams will be desperate for victory.

Playing at their 11th World Cup, South Korea began their campaign with a gritty 0-0 draw with Uruguay, putting on a lively display.

Cameroon striker Vincent Aboubakar came off the bench to score one goal and set up another as the Indomitable Lions rescued a point in their 3-3 draw with Serbia on Monday that ended a run of eight successive World Cup losses for the African side, reports Reuters.

Cameroon and Serbia go into Monday’s Group G match knowing thatanything less than a victory could send them packing fromthe World Cup by the time Brazil and Switzerland play later in the day.

Serbia are bottom ofthe group after losing 2-0 topre-tournament favourites Brazil while Cameroon’s 1-0loss to Switzerland means the African side are still seeking their first victory in the World Cup since 2002.

We'll find out in our first game of the day!

Portugal could qualify early for the next phase of the World Cup with a game remaining if they beat Uruguay on Monday, a task probably much easier said than done.

Uruguay have the World Cup edge in winning the tournament twice, albeit a few generations ago, and are more than familiar with Portugal, having knocked them out of the contest in 2018 in the round of 16.

Germany stay in the hunt