Tremendously happy with my first hat-trick since I came back to Old Trafford: CR7 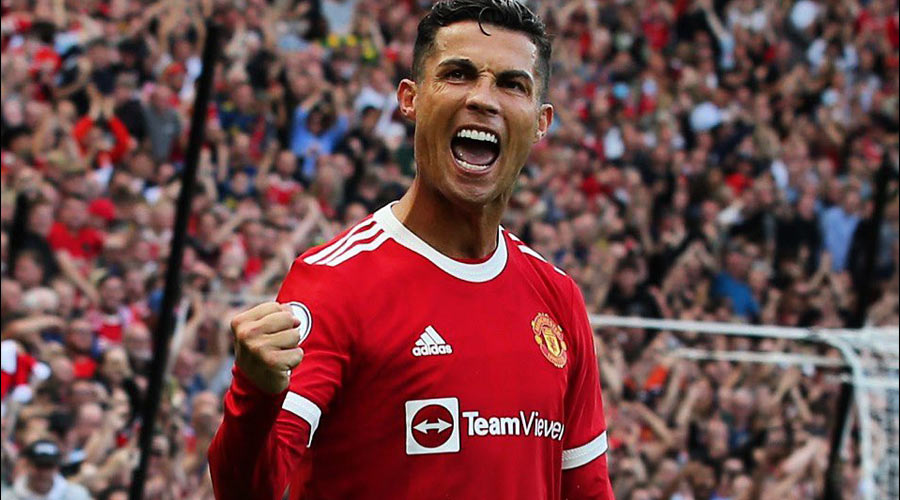 The all-time top goalscorer title in football is much contested and Fifa does not keep an official record, but the world governing body estimates that Austro-Czech Josef Bican netted 805 goals during a career that lasted 1931-55.

Ronaldo’s 12th-minute opener at Old Trafford was a superb strike from distance that helped him equal the record.

The Portugal international then went past Bican with a tap in from Jadon Sancho’s neat pass to put United 2-1 in front before powerfully heading home his third to spark wild celebrations in the stands as United won 3-2.

It was the 59th treble of Ronaldo’s career and his first for the Old Trafford side since 2008 following his return.

“Tremendously happy with my first hat-trick since I came back to Old Trafford!” Ronaldo wrote on Instagram. “Nothing beats the feeling of being back on the pitch and helping the team with goals and effort.”

Ronaldo’s goals have been scored for Sporting, United, Real Madrid, Juventus and the Portugal national team. The Czech FA has said that Bican’s total was actually 821 goals following a review of his statistics.

Brazilian strikers Pele and Romario each scored more than 1,000 goals during their careers, but those statistics include strikes in amateur, unofficial and friendly matches. After the match, Tom Brady walked onto the Old Trafford field to greet Ronaldo.

The former NFL great Brady, who retired last month aged 44, was very impressed with the 37-year-old Ronaldo’s look of determination that bordered on anger.

Brady was not like that. He kept his emotions well hidden for most of his Hall of Fame career as a quarterback for the New England Patriots and latterly the Tampa Bay Buccaneers before retiring with a record seven Super Bowl triumphs.

But while a fist-pump or a back-slap might have been as emotional as Brady managed publicly in most games, there was never any doubt he burned with the same passion and desire as fellow Greatest of All Time (GOAT) contender Ronaldo.

The Portuguese has scored 18 goals so far this season, after returning to United from Italian club Juventus, but there has been continuous chatter from pundits that he is a ‘problem’ for the club and more recently suggestions that all is not well in his rapport with interim manager Ralf Rangnick.

So there was an extra fire in Ronaldo’s performance on Saturday and United’s World Cup-winning French midfielder Paul Pogba addressed the issue head on.

“He has never been a problem. You have the best striker in history in our team, it cannot be a problem. Today (Saturday) he showed why he is Cristiano Ronaldo. The performance from him and all the team was very brilliant,” he said.

“Everybody knows Cristiano — there’s no need to talk about him. That’s what he does. He didn’t play in the last game, but he comes back and scores three goals. Everybody’s happy.”

Tottenham’s Italian manager Antonio Conte had no doubt about the impact of the five-times Ballon d’Or winner on the game.

“Cristiano Ronaldo and Lionel Messi are the two best players in the world in this era. When you play against this type of player, they’re decisive. Without Cristiano Ronaldo, for United it wouldn’t have been a good night,” he said.

His German counterpart Rangnick was quick to praise the team performance but could not ignore the display by the former Real Madrid and Juventus man.

“It was his best performance, at least since I arrived. He was good in training on Thursday and that is why I decided to start him. Fantastic performance by him but also by the rest of the team,” he said.

The crowd lapped it up with Old Trafford loudly showing its appreciation.