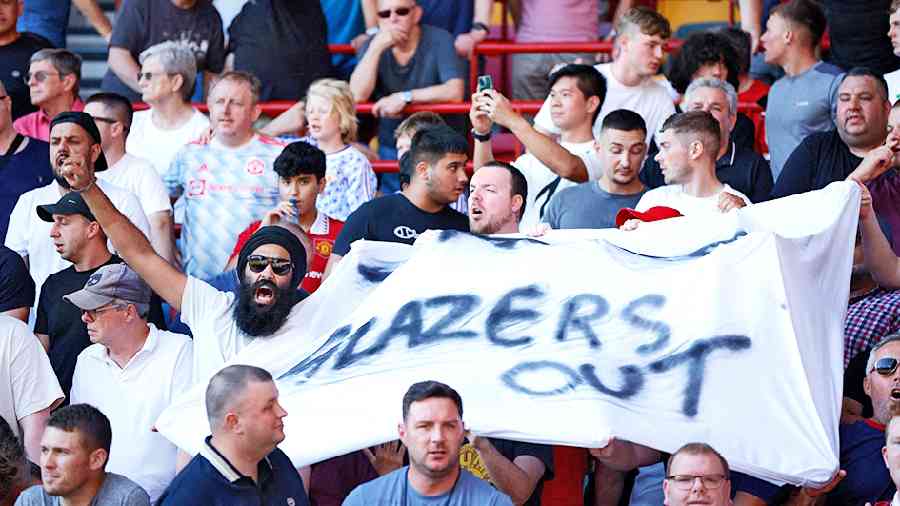 Angry Manchester United supporters display “Glazers Out” banners in protest against the family’s ownership of the club, ahead of the Premier League match at the Brentford Community Stadium in London on Saturday.
Twitter
Reuters   |   Manchester   |   Published 14.08.22, 03:08 AM

A shambolic Manchester United conceded four goals in the opening 35 minutes in a 4-0 drubbing at Brentford on Saturday as their woeful start to the Premier League season continued.

United’s seventh successive away league defeat was assured long before the interval as Brentford took ruthless advantage of a catalogue of errors by the visitors.

The rout began in the 10th minute when United keeper David De Gea allowed a weak shot by Josh Dasilva to slip past him.

Things got worse eight minutes later when De Gea played the ball out to former Brentford player Christian Eriksen who was caught in possession and Mathias Jensen slotted home.

When United’s defence failed to deal with a corner and Ben Mee glanced in a close range header to make it 3-0, the Brentford fans were ecstatic while United’s new manager Erik ten Hag looked ashen-faced in his technical area.

Brentford’s fourth was a gem as Ivan Toney delivered a diagonal ball to Bryan Mbeumo from a counter-attack and Mbeumo calmly beat De Gea.

Ten Hag made three substitutions at half-time with Raphael Varane, Tyrell Malacia and Scott McTominay coming on but despite a slight improvement United offered little fight.

Brentford’s fans serenaded their players with “Hey Jude” at the final whistle while United’s players looked crestfallen as they trudged off rock bottom of the table having also lost their opener at home to Brighton & Hove Albion.

Manchester City made it two wins from two after thrashing newly-promoted Bournemouth 4-0 at the Etihad Stadium.

The champions wasted no time getting into their stride, as Norway striker Erling Haaland marked his home debut with an assist for Ilkay Gundogan’s opener after 19 minutes.

With the first goal on the board, City cut loose and scored a sumptuous second 12 minutes later as Kevin De Bruyne curled a fine strike into the net with the outside of his foot.

Phil Foden added another before half-time and it was just a matter of how many more the hosts would help themselves to.

Haaland’s moment in front of goal came late in the second half but he failed to connect properly with Jack Grealish’s pull back.

It mattered little as a late own goal from Jefferson Lerma put the icing on the cake, with City maintaining their 100 per cent start to the new campaign at a canter.

Gabriel Jesus opened his Arsenal account with two goals as the London side maintained their strong start with a 4-2 victory over Leicester City.

The Brazilian forward produced a dazzling display, scoring twice before the break and going close to a hat-trick on several occasions.

On his home debut following his move from Manchester City, Jesus chipped Arsenal in front in the 23rd minute and made it 2-0 with a poacher’s close-range header in the 35th.

Leicester got a lifeline when William Saliba, also making his home debut, headed into his own net eight minutes after the break but almost immediately a mistake by Leicester keeper Danny Ward allowed Granit Xhaka to restore Arsenal’s two-goal lead.

Aston Villa’s Steven Gerrard got the better of former England teammate Frank Lampard, now in charge at Everton, as his side won 2-1 at Villa Park, when the two faced each other as managers for the first time in the Premier League.

“I’m really pleased with our level of performance, I believed that if we found that level there would be a different outcome from last week,” Gerrard told BBC.

“We looked a different team today (Saturday). It was tough conditions for both sets of players, but they were excellent in terms of the game plan. We really wanted to make it about their back three, and both goals have come off that.”

Villa’s Ollie Watkins managed to stretch the Everton defence as he created goals for Danny Ings and Emiliano Buendia and, despite a late own goal by former Everton player Lucas Digne, Villa stood firm to claim the three points.