League Round-Up: Memphis Depay does it for Barcelona 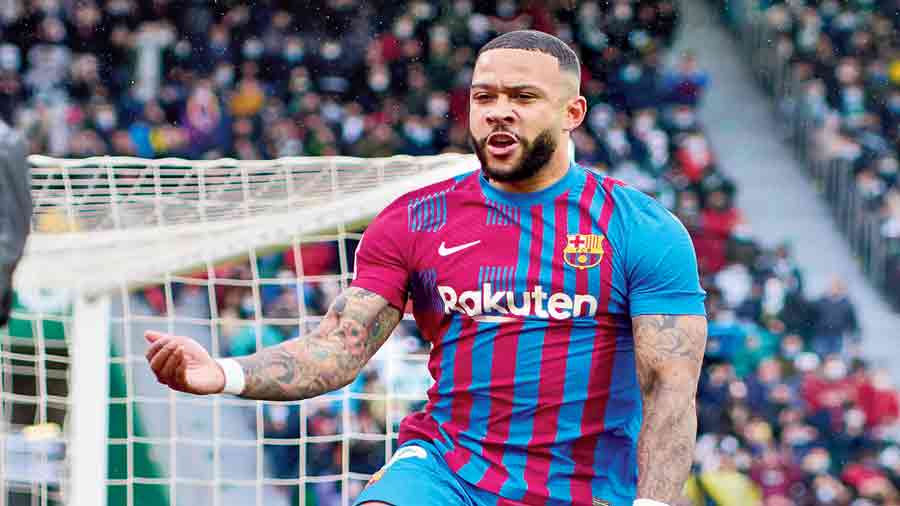 Memphis Depay celebrates after scoring for Barcelona against Elche CF in Elche on Sunday.
Getty Images
Reuters   |   Published 07.03.22, 12:54 AM

Barcelona fought back to earn a 2-1 win in a frantically entertaining match at Elche on Sunday as a late penalty from Memphis Depay ensured they continued their revival after a difficult start to the season.

Having fallen as low as ninth back in November, when former coach Ronald Koeman was fired, Xavi Hernandez’s revitalised Barca have climbed into La Liga’s top three with 48 points, leapfrogging Betis in third place.

Elche opened the scoring right before half-time when Pedri tried to clear the ball but gifted an assist to Fidel Chavez, who outran Dani Alves and scored with an angled shot just inside the right post.

Ferran Torres scored the equaliser in the 61st minute after great play from Ousmane Dembele down the right flank.  On Saturday, Real Madrid fought back to earn a 4-1 home win against Real Sociedad that extended their lead at the top of La Liga to eight points ahead of second-placed Sevilla.

Real dominated the game but they fell behind after 10 minutes to a penalty converted by Mikel Oyarzabal after Dani Carvajal tripped David Silva. Teenager Eduardo Camavinga came to the rescue five minutes before half-time, rifling home the equaliser from 25 metres with an unstoppable left-footer.

Ahead of Wednesday’s last-16 Champions League second-leg clash at home to Paris St-Germain, which Real Madrid trail 1-0, Los Blancos left their recent questionable performances behind them to put on a show against Sociedad.

The La Liga leaders took advantage of Sevilla’s disappointing 0-0 draw at Alaves on Friday and have moved to 63 points against the 55 of their closest contender.

“This is the intensity that we need to have on Wednesday,” coach Carlo Ancelotti told a news conference.

Neymar lost possession in the Nice half and the home side broke forward through Calvin Stengs, whose deep cross to the back post was met on the half-volley by Delort as he arrowed his shot into the top corner of the net.