Xherdan Shaqiri was at his effervescent best, scoring two fine goals to leave Switzerland in pole position to advance as one of the best third-placed teams 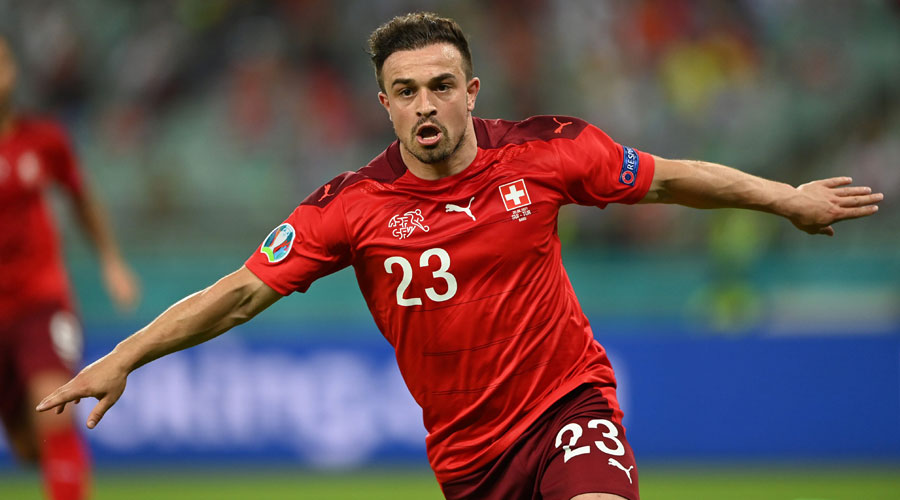 Xherdan Shaqiri scored twice to lead Switzerland to a 3-1 win against Turkey on Sunday in their Euro 2020 Group A match in Baku.

Shaqiri struck two of four high-quality goals and Steven Zuber bagged a hat-trick of assists as Switzerland confirmed Turkey's exit and gave them every hope of reaching the Euro 2020 knockout stages as one of the best third-placed teams.

Turkey began brightly in Baku, but fell behind to Switzerland's first attack of the game on six minutes. There did not look to be much on as Haris Seferović took possession on the edge of the area with his back to goal, but the Benfica forward embraced his graceful side, pirouetting and drilling a low shot through Merih Demiral's legs and just inside the far post.

Turkey's hopes were already fading fast. On 26 minutes they all but vanished as Shaqiri, scorer of the best goal of EURO 2016, thumped in from long range to add another pearl to his collection. It was clinical stuff from Switzerland, who had Yann Sommer to thank for maintaining their advantage with a string of saves as the Crescent-Stars peppered his goal.

Uğurcan Çakır pulled off some brilliance of his own, notably denying Shaqiri in a one-on-one, and just for a moment that looked like it could prove important as İrfan Can Kahveci's fine strike made it 2-1. Ultimately, though, Shaqiri had the last word, giving Steven Zuber a hat-trick of assists as he fired in the wide man's cross.

Xhaka hit the post with a free-kick as Switzerland sought more goals to pip Wales for second but it wasn't to be and they must now wait to see if they are confirmed as one of the best third-placed teams.

Switzerland’s Xherdan Shaqiri was named the Star of the Match.