The Azzurri become the first team to qualify for the round of 16; Gareth Bale and Aaron Ramsey find their touch back; Russia spoil Finland’s party plans with a 1-0 victory 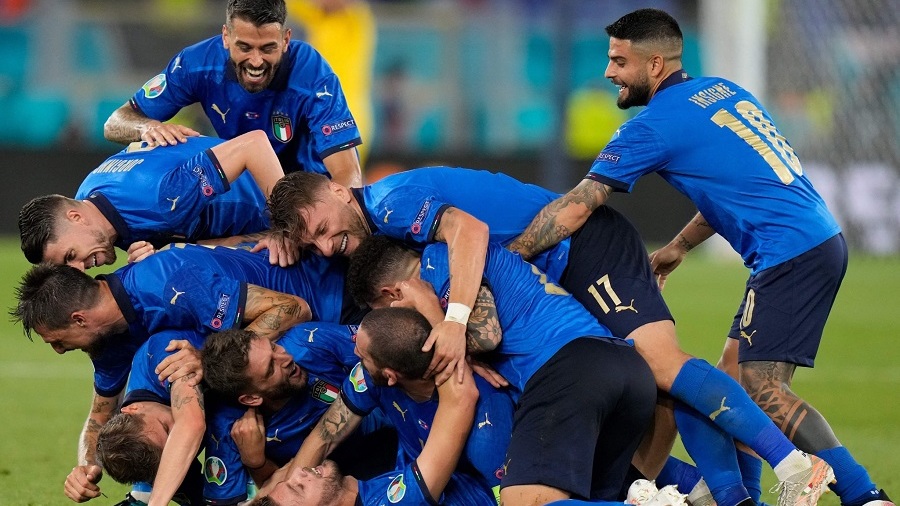 Italy’s Euro 2020 outing has been so far, so good. The Azzurri thrashed Switzerland 3-0, becoming the first team to qualify for the knockout stages of the tournament. Manuel Locatelli scored a brace and Ciro Immobile fired in a late goal to guarantee the Azzurri a top-two finish in Group A standings and a last-16 berth.

That’s not the only reason why Roberto Mancini’s side will have a spring in their step. Italy now remain unbeaten in 29 matches, and have not conceded a goal in their last ten victories.

The scoreline might put a smile on your face, but coach Mancini knows how it panned out. “We played well, we wanted to win at all costs. They started well, it was not easy to win a second game in five days,” he told RAI after the match.

There were initial jitters for 1968 European Championship winners. Giorgio Chiellini’s goal was dismissed by video review early in the match, and soon after the Italian captain had to walk off the pitch due to a left thigh injury.

To guarantee a finish at the top of the table, Italy will have to beat Wales on Sunday.

Gareth Bale and Aaron Ramsey found their touch back as Wales beat Turkey 2-0 in Baku on Wednesday.  Bale set up both goals but missed a penalty. The winger played a lobbed pass over the defence and Aaron Ramsey chested it down before knocking it past onrushing Turkey goalkeeper Ugurcan Akir in the 42nd minute. Connor Roberts scored the second goal in the final seconds of injury time after Bale dribbled along the touchline from a short corner.

The win moved the Welsh closer to a place in the last 16 with four points in Group A. Turkey have zero points after losing both their matches. Bale had a chance to score one himself in the 61st minute but he sent his penalty kick over the bar after being tripped by Zeki Elik on the edge of the area.

The Wales captain hasn’t scored for his country in 13 games. His last goal came against Croatia in Euro 2020 qualifying in October 2019.

Ramsey had more chances to score before finally giving his team the lead, including scooping the ball over the bar in the 24th when one-on-one with Akir.

Turkey captain Burak Yilmaz had five shots but couldn't convert any of them, most notably when he missed an excellent chance early in the second half. He volleyed over the bar from close range when a corner was headed on to him. Turkey had strong support from travelling fans and many locals in close ally Azerbaijan. The presidents of both Turkey and Azerbaijan were in attendance.

Aleksei Miranchuk finally gave Russia something to smile about at the European Championship. The left-footed playmaker produced the one moment of class in a chaotic game to give Russia a 1-0 win over Finland, and their first points at Euro 2020.

The pessimism that followed the Russians’ 0-3 loss to Belgium in their opening Group B game was replaced by loud cheers and jubilant chants at the final whistle at Saint Petersburg Stadium.

A loss would have left Russia with an extremely difficult task to qualify for the knockout stage, given its last match is a trip to Denmark on Monday.

Now Russia are tied on points with the Finns, who missed the chance to reach the last 16 with a game to spare with a second straight victory in their first major soccer tournament. Their first victory was 1-0 over Denmark in a match marked by Christian Eriksen's collapse.

Artem Dzyuba was involved in Miranchuk’s superbly taken goal, which wasn’t in keeping with the overall standard of a game.

Finland coach Markku Kanerva had expressed his concern ahead of the game that his players might still be traumatised by the incident involving Eriksen on Saturday.

Yet Finland, cheered on by about 4,000 fans who made the 200-kilometer journey from the Finnish border to St. Petersburg were the better team in the early stages and had a headed goal by Joel Pohjanpalo ruled out by video review in the third minute.