Advertisement
Home / Sports / Story of a flawed genius, in 2 goals

Story of a flawed genius, in 2 goals

He picks up the ball, turns a circle and then makes a run 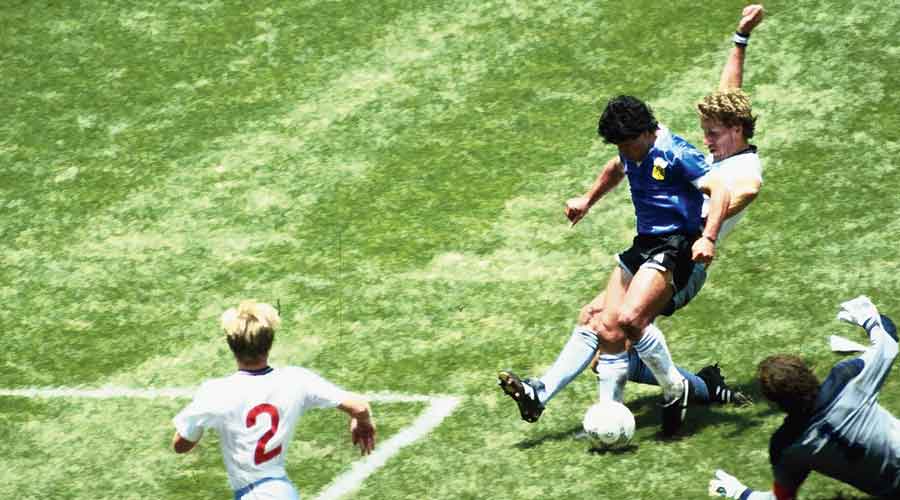 June 22, 1986. The World Cup quarter final underway in Mexico City. Diego Maradona, then a young man of 25, gets the ball in his own half.

He picks up the ball, turns a circle and then makes a run.

Football was about to witness what Paul Gardner in The Simplest Game would describe as “10 seconds of pure, unimaginable soccer skill to score one of the greatest goals in the history of the World Cup.”

He wrong-steps Gary Stevens, then sends Terry Butcher in the wrong direction; Terry Fenwick shirks, and as Maradona nears the goal, he again escapes the advances of Butcher. He then moves the ball from right foot to left before putting it past Peter Shilton.

“Whenever I watch it again I can hardly believe I pulled it off...,” Maradona would later say of his mesmerising 10-second run.

The 55th-minute goal had come barely four minutes after another, that too from Maradona. But that first goal didn’t come from the magic of Maradona’s feet; it would come through what the man himself would later cheekily call the “Hand of God”.

With the game at 0-0, there was a scramble at the England goalmouth. Defender Steve Hodge hooked the ball over his head, meaning to pass it to goalkeeper Shilton. Maradona rose to intercept, clenching his raised fist close to his head, and punched the ball over the outstretched arm of Shilton, 6’1”, flicking his head as he did so to hide his actions.

He then sprinted towards the corner flag, pausing a fraction of a second to look at the referee, before celebrating in full.

Maradona scored an almost equally brilliant solo effort against Belgium in the following game, yet his handled goal against England became an enduring image.

To the English such deviousness and cheek merely added insult to injury. Others injected the feat with greater meaning: Brian Glanville called it “Corinthian” while a book written by a committee of Neopolitan lawyers, doctors and anthropologists later

declared: “His goal scored with the hand, the famous hand of God, reminds one of Ulysses for its deception and cunning.”

In Mexico, Maradona was at his imperious best. Short, muscular and lightning quick, the 5’5” diminutive man slalomed through opposition defences, hurdling challenges and brushing off crude attempts to stop him. He was instrumental in Argentina’s victory in the competition, scoring all four of the team’s goals against England and Belgium.

And in the final, Maradona’s pass through the middle of the West German defence set up the winning goal in a 3-2 victory for Argentina. “No player in the history of the World Cup had ever dominated in the way Maradona ruled over Mexico-86,” Gardner wrote.

But those two goals in the quarter final against England have come to symbolise the flawed genius that was Maradona. His story is etched somewhere between these extremes — a reminder that those blessed with immortal feet can also have hands of clay.

Written with inputs from NYTNS and agencies