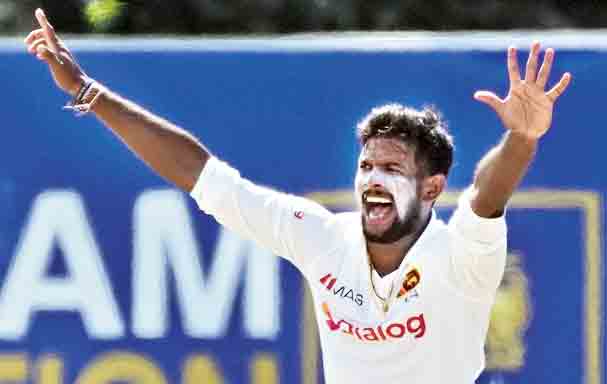 Off-spinner Ramesh Mendis fuelled a Sri Lankan fightback, against the West Indies, with a maiden five-wicket haul. But the hosts still trail by three runs in the second innings at stumps on Day III of the second Test.

Sri Lanka were 46/2 in their second innings at close of play on Wednesday, having conceded a 49-run first-innings lead. The visitors were all out for 253 in their first essay.

The game is evenly poised at this stage.

Captain Dimuth Karunaratne (6) was run out to a brilliant direct hit from Kyle Mayers, before Oshada Fernando (14) too ran himself out. Pathum Nissanka was batting on 21 with Charith Asalanka on four at stumps. Mendis had figures of 6/70, while left-arm spinners Praveen Jayawickrama and Lasith Embuldeniya took two wickets each.

The Windies went to lunch strongly placed on 145/2 but lost the remaining wickets for the addition of just 59 runs. Resuming on 69/1, the Windies batted well to add 76 in the first session, losing only one wicket.

But the slide began after lunch. when captain Kraigg Brathwaite, who was batting with confidence, was bowled by Embuldeniya for 72. The bowler came over the wicket and pitched it outside Brathwaite’s leg-stump, before it turned sharply and hit the top of off-stump. Mendis then had Roston Chase (10) caught at leg slip by Asalanka and trapped Shai Hope (22) lbw.