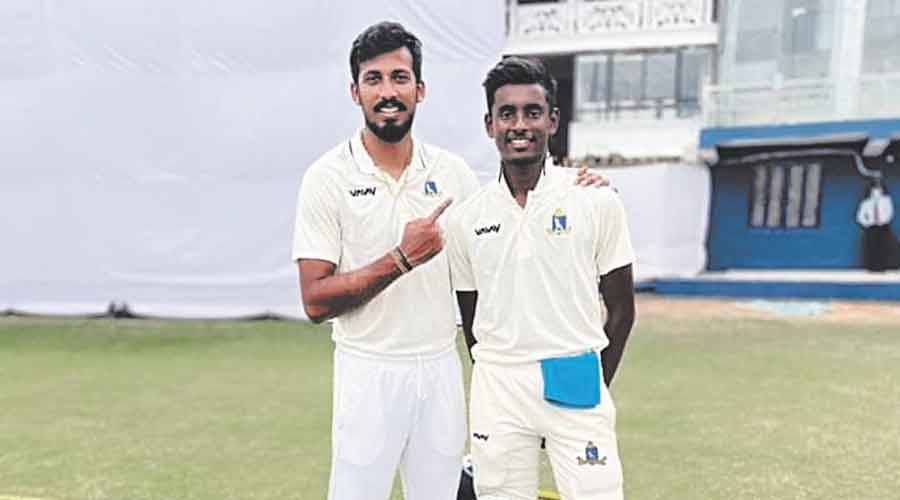 Stepping into the shoes of an international cricketer, and that too on your first-class debut, is never easy but Abishek Porel did it with consummate ease during Bengal’s Ranji Trophy opener against Baroda in Cuttack.

The result: a courageous 53 not out and an unbroken 108-run partnership for the seventh wicket with Shahbaz Ahmed that fetched Bengal a victory after being bundled out for 88 in the first innings.

Porel, 19, didn’t show any nerves though he assumed he would be the first-choice wicketkeeper since Wriddhiman Saha had made himself unavailable for the match. Having made it to the senior Bengal squad on the basis of a stupendous Cooch Behar Trophy campaign, during which he scored over 700 runs in four matches, Porel showed he had the temperament to succeed at the highest level.

Born in a middle-class family to parents Somnath and Anima, he started his journey when he was barely five years old at the National Sporting Club in their neighbourhood in Chandernagore. Coach Pradip Mondal noticed the talent in this young kid and pushed him to participate in various age-group tournaments in and around Calcutta.

Being a wicketkeeper he was much sought after by various clubs and coaching centres. That he was also good with the bat helped him and he was a regular at the CAB-organised Ambar Roy sub-junior meet for a few years.

Travelling from Chandernagore to Calcutta wasn’t easy and the youngster had to endure the struggles of going around in local trains and then public transport with his parents to reach far away destinations. Even today, he has to leave home sometimes as early as 6am to attend practice or play a match.

Father Somnath was a national level kabaddi player but that couldn't fetch him a job at Eastern Railway. So he started with a small-time service at Baranagar Jute Mill before switching to other private companies.

Abishek’s flair at that young age encouraged his parents, with support from National Sporting Club, to switch him to Utpal Chatterjee’s coaching centre at Deshbandhu Park, where cousin Ishan also used to train. He prospered there under coach Bibhas Das.

“It wasn’t easy. We struggled to make ends meet at times since playing cricket meant the need for a lot of financial support. Bibhas Sir helped us a lot and we remain grateful to him,” his father recalled.

But once he made it to the under-16 Bengal side, things improved. It has been a gradual progression since, culminating in his making the Ranji squad this time.

There was never any doubt about his talent and his ability to play shots and dominate the bowling. An insipid performance in the one-day Vinoo Mankad Trophy and the U-19 Challengers that followed cost him a place in the initial U-19 World Cup squad. But he didn’t lose heart.

Getting to work with former India opener Devang Gandhi helped him immensely. The Bengal U-19 coach initiated long conversations with him and worked on his mental aspect. It showed in the maturity in his batting, he could graft on turning tracks and also bat solidly on seaming wickets.

“He was technically sound, just a bit here and there,” Devang said. “I stressed on his playing according to the situation. I also told him not to lift against spinners be it at nets or during the match, unless it was absolutely essential.”

Devang hasn’t been surprised by his success. “The transition has been smooth. It’s heartening to see this and I am sure he will inspire a whole lot of others.”

This has only been a good beginning and Abishek has a long way to go.