Even if KKR beat Lucknow in their final game of this league phase, they will finish with 14 points 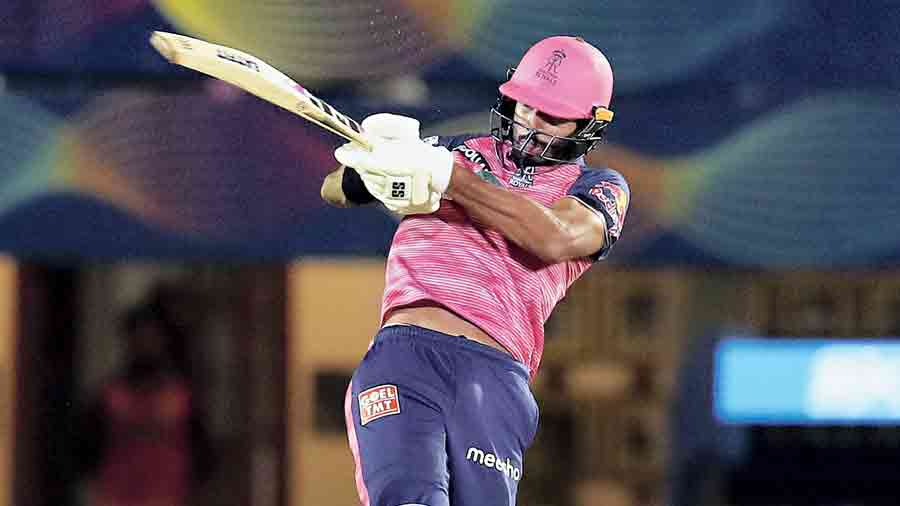 Devdutt Padikkal of Rajasthan Royals in action at the Brabourne Stadium on Sunday
PTI
Sayak Banerjee   |   Published 16.05.22, 01:54 AM

Rajasthan Royals seemed to be losing the plot versus Lucknow Super Giants at the Brabourne Stadium in Mumbai on Sunday. Their batsmen, including captain Sanju Samson, were unable to convert good starts once again.

The Royals, though, could still post a competitive total of 178 for 6 and for that, a fair amount of credit has to go to Ravichandran Ashwin (10 not out) and Trent Boult (17 not out off 9 balls) for their 26-run unbroken stand for the seventh wicket off the last 2.2 overs of their innings.

For sure it was a comprehensive victory for the Royals, which took their points tally to 16 as they also leapfrogged Lucknow to second place in the standings by virtue of a better net run rate. Both teams now have one more game remaining and they need to win them in order to confirm a place in the last four.

The Royals’ victory also makes the equation tougher for Kolkata Knight Riders. Even if the Knights beat Lucknow in their final game of this league phase, on Wednesday, they will finish with 14 points, while Royal Challengers Bangalore, Delhi Capitals and Punjab Kings can still get to 16 if they win their remaining matches.

Winning the toss and batting first, the Royals had a start and stop innings — they lost Jos Buttler early to Avesh Khan before Samson (32), Yashasvi Jaiswal (41) and Devdutt Padikkal (39 off 18 balls) pressed on the accelerator but all fell in spite of being well set. It was left to Ashwin and Boult to get those precious runs.

With the ball thereafter, Boult, as he had done in the first leg clash versus Lucknow, struck twice in his second over. Off back-to-back deliveries, he accounted for Quinton de Kock and the promoted Ayush Badoni to leave Lucknow wobbling at 15 for 2 in the third over.

Worse was to follow for Lucknow as captain KL Rahul, soon after depositing Prasidh over cover for a six, couldn’t clear point as he departed in the last over of the Powerplay.

Deepak Hooda (59) then produced what was a truly classy knock. But Yuzvendra Chahal, taking a pounding early on, finally had his way to send Hooda back. That sealed the game in favour of the Royals.