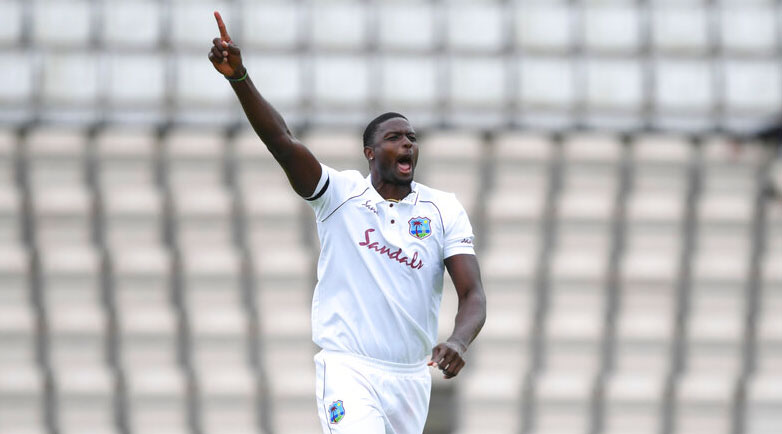 Jason Holder celebrates the dismissal of Jos Buttler during the second day of the first cricket Test in Southampton on Thursday.
AP
Our Bureau And Agencies   |   Calcutta/Southampton   |   Published 10.07.20, 03:15 AM

Shannon Gabriel (4/62) struck early in the morning and captain Jason Holder (6/42) then followed it up with an excellent spell of accurate bowling as the West Indies restricted England to a modest 204 on Day II of the first Test at the Ageas Bowl.

In reply, the Windies were placed at 57/1 with bad light once again forcing an early end to the day’s play.

James Anderson finally had the DRS verdict in his favour when he trapped John Campbell lbw. But that happened only after the left-handed opener twice made the right call to review, which helped overturn two lbw decisions. At stumps, the other opener, Kraigg Brathwaite was batting on 20 with Shai Hope on three.

West Indies have the upper hand and the onus now is on their batsmen to put the game beyond England’s reach. The stars of the day were certainly Gabriel and captain Holder, who registered his best bowling figures in Test cricket.

While Gabriel focused more on targeting the stumps, Holder brought the ball into the batsmen as well as moving it away, making full use of the conditions.

Besides his bowling, Holder was spot-on in terms of taking reviews, with the Windies benefiting from almost each of them so far.

England’s first-innings total could have been even lower had it not been for the 30-run stand between the last pair of Dom Bess and James Anderson.

But Stokes too would have departed early had he not been dropped twice.

England began the day on 35 for one after only 17.4 overs were bowled on Day I, but their top order crumbled.

Gabriel had bowled Dom Sibley on Wednesday and produced a similar 90mph delivery that nipped back in to splatter Joe Denly’s off stump in the sixth over of the day.