Virat Kohli manages only 45 in his 100th Test, but enters the 8,000 club; Rishabh Pant steals show with aggressive batting 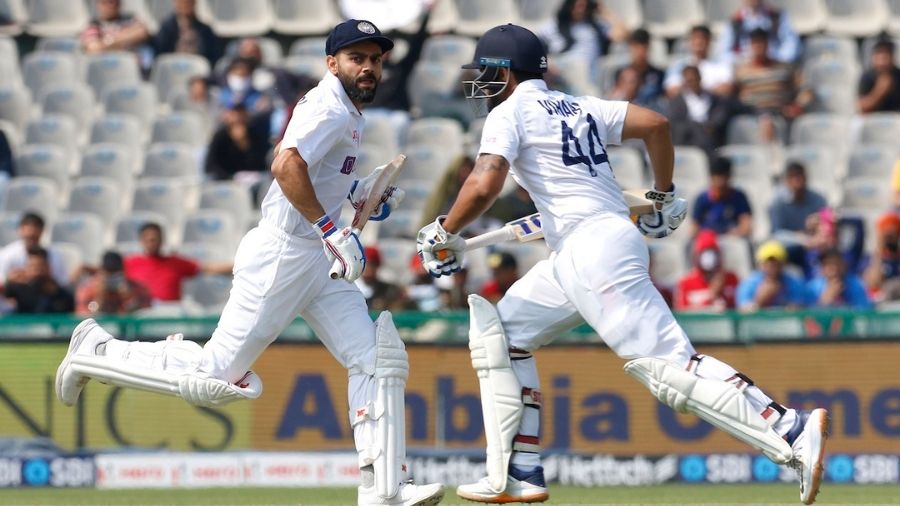 Indian cricket's rapidly-rising box-office draw Rishabh Pant owned the centre-stage in Virat Kohli's landmark 100th Test, hammering Sri Lankan bowlers into submission with an enthralling 96 as the hosts reached a commanding 357 for 6 on the opening day of the first Test here.

The 5000 odd spectators, who had come to watch Kohli perform on a grand stage, saw one of the most flamboyant batters in recent history make a mockery of an average Sri Lankan attack. He was especially brutal when it came to going after left-arm spinner Lasith Embuldeniya (28-2-107-2), who was taken for 22 in one over.

The deathly silence after Kohli's shock exit for a well-made 45 was there for barely a second and half. Because at that point entered the stockily built 24-year-old from India's engineering city of Rourkee and that was followed by a deafening roar which showed his popularity. On Kohli's day, he had completely over-shadowed the legend.

And those who came for Kohli, decided to stay back and savour Pant's mayhem as he started with a signature lofted six off Embuldeniya over mid-wicket fence.

Embuldeniya, who must have felt emboldened when he got one to turn a shade away and tickle Kohli's off-stump, didn't know what hit him.

In just over one and half session, Pant nearly reached his fourth hundred in Test cricket before veteran Suranga Lakmal (1/63), in his last international series, breached his defence.

There were nine fours and four sixes in his 97-ball knock and one couldn't but feel for the young man who looked completely devastated after another near-miss, the fifth time that he has gotten out in the 90s. The walk back to the pavilion took an eternity as it seemed that one would need someone to drag him out.

But coach Rahul Dravid and skipper Rohit Sharma's decision to send him at number five to bring in the left-hander's advantage against a left-arm spinner, had paid the rich dividends they were hoping for.

Embuldeniya didn't actually bowl as badly as his figures might suggest and was pitching the ball up, putting his body into the deliveries and getting them to spin away from the right handers.

Pant being a southpaw obviously diminished his advantage to an extent and then his decision to stand at least a couple of yards outside the crease made the difference. He turned a lot of good length deliveries into over-pitched ones and Embuldeniya, along with other spinners like Charith Asalanka and Dhananjaya de Silva (1/47), also suffered.

The one-handed sixes, which he can now hit on public demand, were in full display for the motley crowd. The Indian team's former strength and conditioning coach Shankar Basu, during an interview with PTI during the 2019 World Cup, had claimed that when it came to raw physical power, Mahendra Singh Dhoni ranked No.1 but Pant was a close second.

To hit a five and half ounce cricket ball into the second tier of a cricket stadium nearly 90 yards away requires brute strength and Pant showed that he possesses that in abundance. Add to it, his balance and nimble footwork. It also helped that Dimuth Karunaratne's mindset was defensive from the word go since Rohit Sharma (29) and Mayank Agarwal (33) had a brisk 50-run stand.

Once a fielding side skipper stations a deep point, deep square leg and deep fine leg within the first hour of the first day, one can get a sense that he has already thrown the towel and playing a waiting game of cutting down boundaries. Even then, Pant found the gaps with very little difficulty when he took guard in the 44th over after Kohli and Hanuma Vihari (58 off 128 balls) had a 90-run stand.

Vihari made good use of his chance in place of veteran Cheteshwar Pujara and looked in control during his stand with Kohli before he inside edged Vishwa Fernando's delivery onto the stumps. It was a perfect setting to score a second Test hundred but Vihari let it slip and became Fernando's only scalp of the day.

A total of 170 for 3 is a neither here nor there and a lot of batters will be caught in two minds -- whether to defend or to attack. But not Pant. With him, there are no half measures and if any critic had an iota of difficulty in understanding why Dravid had a hard conversation with Wriddhiman Saha regarding his future, Friday's matinee show should help in dispelling all doubts.

The Indian team needs players, who can move the game in tricky situations and among the post Kohli-Rohit generation, Pant is an assured match-winner, who can open the game in a session.

Scoring 350 plus runs in a day's play is always bad news for the bowling team and as of now, it seems India will walk away with 12 World Test Championship points without breaking a lot of sweat.

Before the start of the match, Kohli was felicitated by coach Dravid on reaching the 100-Test milestone. Kohli's wife Anushka Sharma was also present on the occasion.

What a moment to commemorate his 100th Test appearance in whites 🙌🏻

Words of appreciation from the Head Coach Rahul Dravid and words of gratitude from @imVkohli👏🏻#VK100 | #INDvSL | @Paytm pic.twitter.com/zfX0ZIirdz